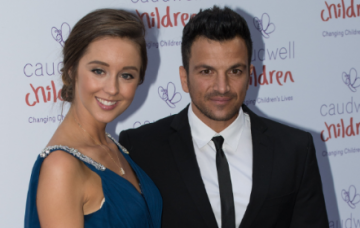 Peter Andre’s wife Emily has admitted they’re “not on the same page” when it comes to having more children.

The couple are already proud parents to daughter Amelia, four, and one-year-old son Theo, while Peter also has son Junior, 13, and daughter Princess, 11, from his marriage to ex-wife Katie Price.

Over the last year or so, Peter has flip-flopped in interviews over whether he wants a fifth child or not.

But in his most recent interview with OK! Magazine, the 45-year-old said he’s quite keen to expand his brood now that Theo is over his “difficult” stage.

But it seems Emily’s not quite convinced!

In her own column for the new issue of OK! Magazine, the 29-year-old doctor said: “Pete said in his recent interview with OK! that he wants one more child but I can’t say I’m on the same page at the moment.

“I think he’s forgotten about the sleepless nights with Theo at the start!

“Maybe when I’ve dedicated a few years to my career I will think about having some more, as I really want to get stuck into it next year.”

In Pete’s own chat with the magazine last week he’d suggested Emily was on board with having another child, saying: “Emily was adamant it was a no but now I’ve started talking about it and Theo’s giving us so much joy, she’s considering it.”

Emily works as a hospital doctor and has appeared as the resident medic on ITV’s Lorraine and in a few cooking segments alongside husband Peter.

The mum of two revealed last year how she was debating whether to pursue psychiatry or become a GP, and said when she had chosen her speciality, she’d embark on specialist training.

Meanwhile, Peter shared a sweet image to Instagram over the weekend showing Emily and baby son Theo have matching cars! Well, kind of!