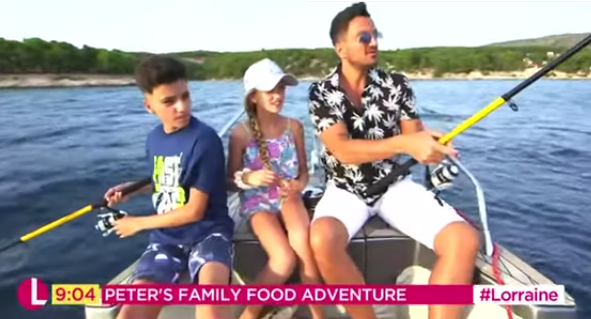 Peter Andre’s kids Junior and Princess were mortified by the Mysterious Girl singer’s dad jokes during a segment on Lorraine today.

Pete and his family have been filming a new segment called Peter’s Family Food Adventure, and wife Emily as well as his two eldest kids have been making cameos.

In today’s clip, Pete, Junior, Princess and the singer’s brother Michael take a small boat out on a fishing trip while holidaying in Croatia.

An unimpressed Princess replies:  “I heard that this morning Dad when we were having a coffee.”

Later, he tells his kids: “There’s plenty more fish in the sea,” to which Princess simply says, “Wow.”

And the fish puns didn’t stop there as just moments later Pete says: “Come on, I’m fishing for compliments.”

As the segment comes to a close, Pete had one last pun, telling Princess and Junior: “Right kids, I think it’s time to wind it up for today.”

It comes after Pete shared a sweet picture of Princess doing sister Amelia’s hair before she headed to school.

“Adorable,” one fan wrote. “So lucky your children have an amazing daddy like you.”

Pete shares Princess, 12, and Junior, 14, with ex-wife Katie Price. It’s thought the kids now live with their dad on a full-time basis.

The singer welcomed daughter Amelia with wife Emily in January 2014, and they announced their engagement shortly after. They wed at Manhead House in Devon in a lavish ceremony in 2015.