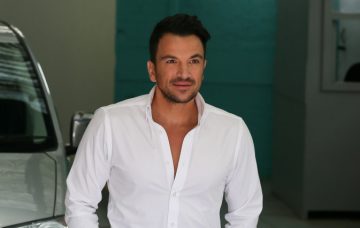 Peter Andre has posted videos of his eldest children on holiday after ex-wife Katie Price pleaded with him to let her know they were okay.

The Mysterious Girl singer is currently enjoying a break in Florida with his and Katie’s two kids Junior, 13, and Princess, 11.

He shared clips of himself and the children on a “road trip” alongside photographer friend James Rudland, who is shooting Peter’s 2019 calendar.

Both Junior and Princess can be seen in the Instagram videos sitting in the backseat as Peter, 45, films them.

In one clip, little Princess is seen out for the count, fast asleep in her seat while brother Junior is pre-occupied with his tablet.

Another clip sees both children joining Peter and his pal to singalong with the stereo, showing they’re having a great time with their dad in the States.

Fans loved the insight into an Andre family road trip, with one saying: “Just lovely to see you and your babies having fun #familytimesarethebest making memories that will last forever.”

Another wrote, “Family goals!” while a third added: “Happy kids.”

Peter’s videos came two days after his ex-wife Katie took to Twitter in the early hours of August 26 to beg her ex-husband to get in touch with her.

She sent a tweet to Peter at 3:30am claiming she’d been trying to get in touch with him and the kids for a while, although maybe missed the fact they could have been on a plane when she sent the message and perhaps didn’t have internet access.

Katie’s tweet read: “Still up at this hour, trying to contact my kids in America,” she said. “Been trying Morning, Afternoon and Night. Please @MrPeterAndre let me know they are ok? 🙏.”

Peter did not publicly respond, other than to share the videos.

Peter is also dad to daughter Amelia, four, and son Theo, one, from his marriage to second wife, Emily.

Peter spoke about the family trip to Florida in his latest New! magazine column, saying he was shooting his calendar, enjoying time with the kids, filming something for the Florida tourist board and visiting Universal Studios in his role as an ambassador.

He also previously said the American trip would serve as a special late birthday treat for both Junior and Princess.

“Bista really wants to swim with dolphins so I’ve told her we’ll definitely do it as a late birthday treat,” he wrote in his column.

Are you looking forward to seeing Peter’s new calendar? Leave us a comment on our Facebook page @EntertainmentDailyFix and let us know what you think!