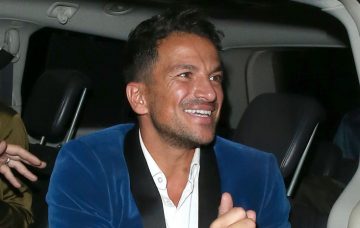 Peter Andre has said he tries to be as honest as he can when eldest children Junior and Princess ask him about media headlines.

In a stunning new photoshoot with his kids for OK! Magazine, the 45-year-old said he aims to protect the children from any negative stories doing the rounds online and in newspapers.

He didn’t directly reference the kids’ mum, Katie Price, 40, who has been subject to numerous stories over the last few weeks including her break-up with Kris Boyson, alleged new romance with an Essex businessman, and the state of her finances.

When asked about protecting his children, Peter said: “I’m dealing with everything that’s going on at the moment, but I think it’s very important to deal with these things privately and I’m doing so.

Peter also spoke about he handles it when Junior, 13, and Princess, 11, directly ask him about specific headlines or stories.

He explained: “I try to be as honest as I can be, but I do try and find a way to divert it. I just want to keep the kids protected.”

Peter and Katie met in the I’m A Celebrity jungle back in 2004 and went on to marry the following year.

They announced their split in 2009.

Since then, Peter has remarried to doctor Emily, 29, the mother of his youngest children Amelia, four, and one-year-old Theo.

Katie has since remarried twice but her marriage to third husband Kieran Hayler, 31, broke down earlier this year amid fresh allegations he’d been unfaithful.

She has three other children: son Harvey, 16, from her relationship with Dwight Yorke and Jett, five, and Bunny, four, with Kieran.

The former glamour model has rarely left the headlines in recent weeks amid ongoing rumours about her love life and finances, the state of her mansion, and even accusations she missed her kids’ first days of school as she was partying abroad.

Katie hit back at the latter claim, saying she’d phoned the children on their first days.

He said: “Obviously when it comes to kids and newspapers and the internet, I try my best to avoid them. Because there’s lots of stories about lots of different things.

“It’s just trying to get them to concentrate on other things because I think the internet is a bit of a scary place in general. You find good news and you can find bad news all in the same hour.”

Peter has just returned to the UK from Florida, where he treated Junior and Princess to a family holiday while he did a spot of work overseas.

He was in the US state to shoot his 2019 calendar and as an ambassador the Florida Tourist Board and Universal Studios Orlando.

Do you worry about your kids when they use the internet? Leave us a comment on our Facebook page @EntertainmentDailyFix and let us know what you think.