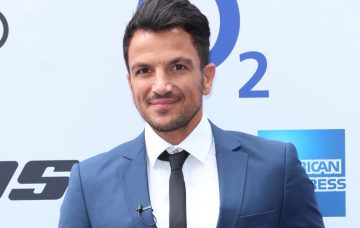 Peter Andre has shared a beautiful new photo of his eldest children on holiday in Florida.

The Mysterious Girl singer’s son Junior, 13, and daughter Princess, 11, have accompanied him to the US while he works on his 2019 calendar and other projects.

On Thursday afternoon, he gave fans an update on the trip by sharing a sun-soaked photo of Junior and Princess with their arms wrapped around each other.

Fans, naturally, complimented the new pic with one saying: “Beautiful kids, enjoy your hols with your dad.”

Another wrote, “Beautiful photo of brother and sister”, while a third said: “Adorable, love their relationship little cuties.”

Peter’s wife Emily and younger children Amelia, four, and Theo, one, are not in Florida.

Emily explained in her latest OK! Magazine column that she couldn’t join the trip as she’s working, and with Millie starting school in September she wanted to spend special time with her.

Peter’s over in Florida shooting his calendar, working on something for the local tourist board and in his capacity as an ambassador for Universal Studios.

Love a bit of @british_airways :)) @antlerofficial

The trip made headlines last weekend when Peter’s ex-wife Katie Price, who is mum to Junior and Princess, took to Twitter in the early hours of August 26 to beg her ex-husband to get in touch with her.

She sent a tweet to Peter at 3:30am claiming she’d been trying to get in touch with him and the kids for a while, although they could have been on a plane when she sent the message and perhaps didn’t have internet access.

Katie’s tweet read: “Still up at this hour, trying to contact my kids in America. Been trying Morning, Afternoon and Night. Please @MrPeterAndre let me know they are ok? 🙏.”

Peter did not respond directly or publicly to Katie’s comment, however he did later share videos of Junior and Princess on a road trip with him in Florida, with both kids having the time of their lives.

A source told The Mirror: “[The children] are away in America with their dad and their phones are with them and are on.”

The star, who also has three other children, is believed to currently be in Majorca celebrating a close friend’s hen do.

She’s also been throwing her support behind a campaign, after plans to improve disabled access to her favourite bar in Blackpool were rejected.

Katie, whose eldest son Harvey, 16, is disabled, wrote on Twitter: “Disabled people should be treated exactly the same as able bodied people! Hearing about this makes me sad!”

Have you ever been to Florida? Would you like to go? Leave us a comment on our Facebook page @EntertainmentDailyFix and let us know what you think!