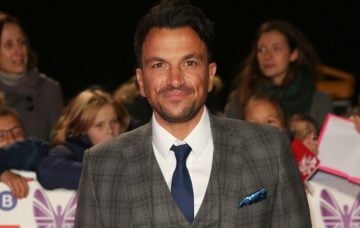 He's too cool for them!

You’d think being a celebrity would automatically make you cool, but apparently nobody told Junior Andre.

Peter Andre has opened up about how his oldest child recently refused to join him on a day out because “he’s too cool” now he’s a teenager.

Speaking in his weekly new! magazine column, the singer explained how he and his wife Emily MacDonagh were at a farm in Taunton, Somerset, along with children Princess, Amelia and Theo.

He said: “Now that Junior’s a teenager, he’s too cool to come to the farm with his dad, so he stayed with a mate!”

Junior, 13, has been living with Pete, 45, since June, while his mum, Katie Price got her life back on track.

He and his little sister, Princess, 11, were reunited with their mum after she left rehab, but are still staying at Pete’s for now.

In another recent column the Australian star moaned about how Junior was teasing him for having grey hair, calling his son: “Such a little goon!” and adding: “Junior’s rapping is coming along well, but I wish he’d spend more time on homework or writing songs and learning lyrics rather than playing on his Playstation. He’s obsessed!”

Read more: Katie Price vows to change her life for herself and ‘not for a man or a job’

The singer also hinted at his children’s teen tendencies on Instagram this week, sharing a funny meme on Monday, with the caption: “My kid when I tell them they’ve had enough screen time”, alongside an outraged reaction video.

His 983k followers agreed wholeheartedly, with one commenting: “Totally true! Mine too! 🙄.”

Thankfully, it seems the Mysterious Girl’s youngest, Theo, two, is still a daddy’s boy and is even making Pete broody (again).

He says in his column: “Theo’s at such a cute age, but it’s definitely not making me broody for more kids… well, maybe it is!

“If Emily and I were to have another child, it would be our last. I wouldn’t mind what sex it is.”

Oi, Junior? Back in the nineties, Pete was the epitome of cool, OK? Remember those curtains… oh wait, never mind.

Are you too ‘uncool’ for the kids in your life? Leave us a comment on our Facebook page @EntertainmentDailyFix and let us know what you think.