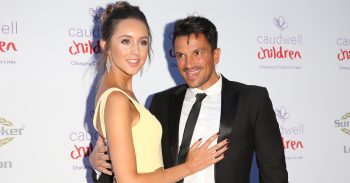 Theo's mum said he is more "demanding" than his older sister Amelia.

The couple have revealed their youngest child, two-year-old son Theodore has started his “terrible twos” and is more “demanding” than his older sibling Amelia, now five, was at that age.

Speaking to OK! magazine, Emily said: “Theo has been getting on so well but recently he has been a little bit temperamental, so I think some of the terrible twos have started!

“With Millie at that age I was quite firm from the beginning and I didn’t reward the behaviour so she just got over it.
“I’m going to try the same with him but he’s a little more demanding than Millie.”

Peter is teaching his two-year-old son to be bilingual so he can speak both English and Greek, which is the mother tongue of Pete’s parents who moved to Australia when he was six.

He revealed in his New! magazine column in December: “Over the last couple of weeks we’ve noticed a real improvement in his speech – he can converse properly and his understanding of Greek has got better, too.

“If I hold something up and ask him what colour it is in Greek, he replies in English!

Read More: Katie Price reportedly jets off for a luxury Thai getaway without her kids

“He’s so much happier now he’s able to talk more because he can tell us what he wants and there’s no frustration there. He’s a little ledge.”

And Pete and Emily, 29, won’t rule out having another baby in the future.

The qualified doctor previously said in her OK! column: “Pete said in a recent interview that he wants one more child but I can’t say I’m on the same page at the moment.

“I think he’s forgotten about the sleepless nights with Theo at the start. Maybe when I’ve dedicated a few years to my career I will think about having some more as I really want to get stuck into it next year.”