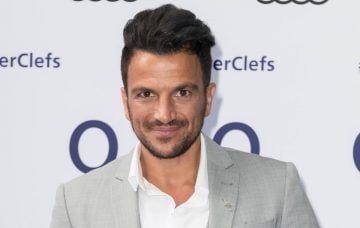 What a good dad!

Peter Andre has revealed he turned down TV work in order to be there for daughter Amelia’s first day of school.

The singer spoke about the landmark day in his column for New! Magazine, explaining that he’d been asked to appear on This Morning, but had to say no as he didn’t want to miss Amelia’s big day.

“I was actually asked to go on This Morning last Wednesday to discuss a campaign against parents smacking children,” he said, “but because it was Millie’s first day I had to say no because I didn’t want to miss it.”

He posted a shot of the occasion to Instagram, sharing a photo of wife Emily and Amelia walking down the driveway, with Amelia, four, dressed in her new school uniform.

The image was captioned: “When did this happen :)) So proud of Amelia’s first ever day at school #timeflys #proudpoppa.”

Peter said he and Emily took Amelia to school together, and confessed they both found it strange to return home without her.

“When we got home, we just looked at each other and were like, ‘It’s just Theo in the house now. How weird is this?'”

The couple will have at least one child at home for a while, though, as Theo turns two this November.

And if Peter has his way, he won’t be the youngest for long – he’s mentioned that he’s keen for one more kid.

Speaking to OK! Magazine he said that now Theo has settled down a bit, he and Emily have talked about having another baby.

“Theo was so difficult for the first 18 months, but he’s amazing now and laughs all the time and it’s made me think I’d like another baby,” he said.

“Emily was adamant it was a no but now I’ve started talking about it and Theo’s giving us so much joy, she’s considering it. I’m a young 45 so I can imagine having one more.”

Another child would bring the Andre brood up to five – Peter is also dad to Junior, 13, and Princess, 11, from his marriage to Katie Price.

Would you take off work for your child’s first day of school? Leave us a comment on our Facebook page @EntertainmentDailyFix and let us know what you think!