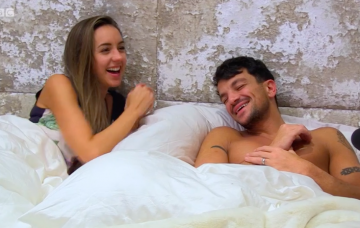 Peter Andre trolled over age gap with his wife

There's 16 years between them

Peter Andre has found himself the subject of online trolling after an appearance on Saturday night television with his wife, Emily.

After the pair took part in Michael McIntyre’s big show, fans expressed their surprise on Twitter at how much younger Emily looks than him.

The Mysterious Girl singer – who, at 45, is 16 years older than his doctor wife – was a guest on Michael McIntyre’s Big Show on Saturday night, where the comedian surprised the couple in bed.

“What is going on?” asked a bewildered-looking Peter, as Richard Arnold also popped up out of nowhere.

Fans were asking the same thing at home, as they marvelled at fresh-faced Emily, lying in bed beside him.

One wrote: “I thought Peter Andre was with his daughter not his wife!! She looks about 14yrs old! That was staged he totally knew Michael McIntyre was coming, [bleep] acting skills there!”

Another tweeted: “Genuinely thought Peter Andre’s wife was his daughter.”

A third added: “N’awwww, it’s Peter Andre and his daughter, Emily.” While a fourth said: “Is it me or does Peter Andre wife look 12 yrs old?” Many more wanted to know how old she was.

Others were kinder, writing: “Peter you were fab, as always such a nice guy – and you and Emily make such a nice couple xx.”

A second commented: “Well done you are a good sport, very funny. What a really lovely couple you and Emily are ♥️ x.”

A third added: “Absolutely loving this. Peter, u were hilarious & such a great sport 💕. Emily looks stunning considering it was the middle of the night. You’re a very lucky man lol xx.”

Peter doesn’t seem to mind reminding everyone of his age, and on Sunday he posted a hilarious throwback shot of his single, Funky Junky.

Hahaha I remember this. Wow . Big hit in its day in Oz.

He captioned it: “Hahaha I remember this. Wow . Big hit in its day in Oz.” The sing was released early in 1993.

Before Emily, Peter was married to Katie Price, with whom he shares Junior and Princess.

The singer then met the junior medic through her dad, while she was studying medicine. They now have two children together, Theo and Amelia.

In a recent interview with The Sunday Times, he spoke about Emily, saying: “When you meet a proper, beautiful, educated lady like Emily, if you want to be taken seriously then you put in 100 per cent straight away.”

We think these two are a good match!

Do you think the age gap is getting more obvious? Leave us a comment on our Facebook page @EntertainmentDailyFix and let us know what you think.