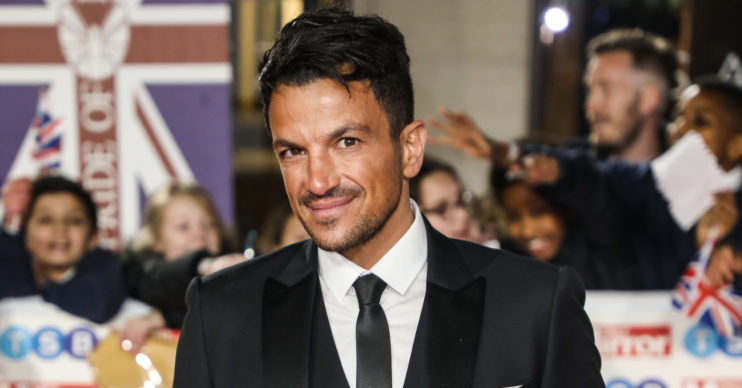 The 47-year-old is currently looking after his four children while wife Emily MacDonagh works on the NHS frontline.

And it appears the doting dad has finally mastered the art of hairdressing as he shared a snap of daughter Amelia’s hair today (June 24).

In the photo, Amelia, six, stood with her back to the camera as she proudly showed off Peter’s handy work.

Posting the snap to his Instagram Story, he wrote: “Dads can do hair too.”

Peter may have had his hands full during lockdown, but it certainly hasn’t put him off having more children in the future.

He recently admitted he wants twins with wife Emily – but she isn’t keen.

Writing in his new! magazine column, he shared: “I’ve been umming and ahhing about having another child, but then Emily has thrown this bombshell at me about having two more!

“She said: ‘It is possible before you turn 50!’ I’ve just gone with it, because what’s the point of questioning it?

“I’d be up for having twins, but she’s definitely not on board with that.

“At one point I was adamant I wouldn’t have any more kids, but then because of the lockdown I’ve been less focused on my work and I’ve realised how amazing it is having a big family.”

The couple have also spoken openly on their decision to have two more kids in the next three years.

Pete told The Sun Online: “Here I was trying to get my head around the thought of having one more child.

“But then Emily throws a bombshell on me of having two more children. So now I’m really confused about what she wants.”

The star is already a dad to Amelia and three-year-old Theo with Emily, while Junior, 15, and Princess, 12, are from his previous marriage to Katie Price.

The 30-year-old self-isolated at home after suffering symptoms – and has discovered she now has the killer bug’s antibodies.

Peter told The Sun: “It was a really scary time. Emily became ill when the cases were soaring, nobody knew the symptoms, not all doctors were wearing masks and Emily was very exposed to it.”

However, Emily apparently believed she had come down with the illness herself because the symptoms were so unique.

Not only did she lose all sense of her taste and smell, Emily also suffered with a headache, sore throat and aches in her limbs.

The star also revealed that despite the worry, he wanted to shield his kids from what was wrong because he didn’t want them to catch it.