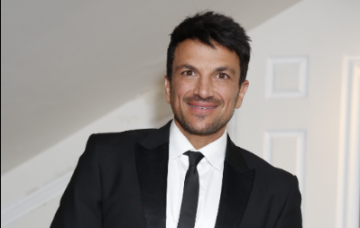 Peter Andre has shared a sweet picture with his Instagram followers of his daughters Amelia and Princess happily playing together.

The image shows Princess, ten, his daughter with Katie Price, and four-year-old Amelia, who he had with second wife Emily, bouncing on a trampoline.

The pair hold hands as they have fun jumping in their dad’s garden.

Peter captioned the picture: “Amelia won’t let Bista out of her sight. Sharing her bed as we speak. Too cute #sisters.”

‘Bista’ has always been Peter’s nickname for Princess, after his eldest son Junior, 12, coined the phrase when struggling to say “sister” as a child.

The Mysterious Girl singer’s fans found the image as delightful as he did.

“A special bond that’ll last forever,” one said of the sisters. Another agreed, writing: “Sisters are forever friends.”

A third complimented the star’s “beautiful girls,” while a fourth said: “It’s lovely to see how Princess looks after the little ones, so grown up now bless her.”

Princess is also a sister to Peter’s sons Junior and Theo, one. She also has siblings Harvey, 15, Jett, four, and Bunny, three, from mum Katie’s other relationships.

Peter replied to one of his friends, backing singer Wendi Harriott, who commented on the picture to say, “sisters forever so cute! Love Mills and Bista.”

He replied: “Honestly Wendi they are sharing the bed right now, so cute. Big boy Junior is in his own room upstairs. They’re great kids they really are.”

He also responded to a follower who said they were “confused” at how Princess and Junior could be sleeping at their dad’s house, when their mum, Katie, had shared an image the same evening of them getting ready for bed at her Sussex mansion.

“How can same kids be in two different homes at the same time?” they asked.

Peter replied: “Not confusing, they were upstairs.”

He added of his ex-wife’s timing: “Not sure why she posted that but hey ho.”

He later confirmed: “Woke them up this morn off to school, I’m pretty sure they were my kids,” with a laughing face emoji. 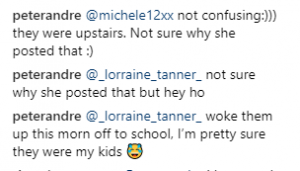 The star’s had a pretty busy year so far but always has time for his family.

He recently spent an extended period over in Los Angeles where he filmed his debut Hollywood movie – a short film called The Inheritance – and worked on songs for his new album.

Pete’s also scheduled to fly to China over the summer for a series of huge gigs.

What do you think of Peter’s family picture? Leave us a comment on our Facebook page @EntertainmentDailyFix and let us know what you think!