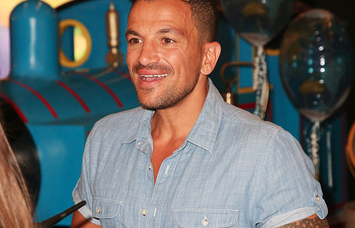 Believes parents must be aware what they're teaching their kids

Peter Andre has taken to Instagram to share a touching parenting moment and remind people that there’s no such thing as gender-specific colours.

The pop star posted a video discussing something that had come up while he was colouring in with his four-year-old daughter, Milly.

Read more: Kerry Katona is helping Gemma Collins to calm down and boost her confidence

Milly had objected when her dad began colouring in a footballer’s socks in pink – and Peter took the opportunity to teach her that pink is a colour for everyone.

“So here’s how perception can change,” he said. “So Milly goes to me, ‘Dad, why are you drawing pink when it’s a boy?’

Girls and boys can like pink you know. It’s what we teach our little ones

He went on to stress the importance of being aware of what you’re teaching your kids – as they don’t pick up preconceptions on their own.

“And that’s how perceptions can change instantly, it’s what we teach our kids,” he said.

“See what I mean, kids don’t know, it’s what we teach them. People can like whatever they want, it’s a free world.”

His fans were quick to show their appreciation for his teaching moment, flooding the comments with their approval.

“My little boy’s favourite colour is Pink, and [he] often walks his pram and baby to the school to collect his sister. Am I worried? Of what! He’ll group to be a loving father!” one fan remarked.

“My daughter is 7 and her favourite colour is Blue! My little boy is 3 and you ask him and he often says pink or purple! He just likes colours,” another said.

“Pink is for anyone and everyone. When girls wear any kind of blue, they aren’t judged, but a boy in any shade of pink is discussed. What a sad world, when beautiful colours have silly meanings,” said a third.

“100% agree with you, all colours are there to be appreciated by everyone,” another fan commented.

Milly is the third of Peter’s four children, and his first with wife Emily MacDonagh. The couple also have a two-year-old son.

He is also dad to Princess and Junior with ex-wife Katie Price.

What do you think of Peter’s video? Leave us a comment on our Facebook page @EntertainmentDailyFix and let us know.