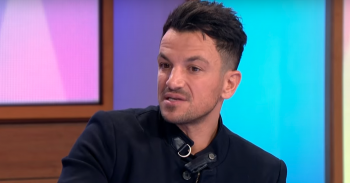 He added "nothing really came" of contacting the cops

Pop favourite Peter Andre has opened up about his nightmare experience with a stalker.

The 46-year-old explained how he was forced to call in police early on in his career after being targeted by a “serious” stalker in his recent magazine column.

Likening the unsettling experience to events from a film, Pete added “nothing really came” of contacting the cops.

However, he did joke a track he wrote while in the jungle for I’m A Celebrity may have caused the obsessed fan to lose interest in him.

Reflecting on Coldplay front man Chris Martin’s decision to seek a restraining order on a stalker, Pete detailed in New! mag how the fan’s actions left him concerned.

He recalled: “I received weird letters in the post, cuttings from newspapers and she once even threatened to kill herself if I didn’t reply.”

But according to Pete the unsettling behaviour settled down once he left Oz.

“Fortunately, it all came to an end when I moved to the UK. She must have gone off me when I released Insania, Lol,” he joked.

Nonetheless, Pete admitted he had to consider the worst as a figure in the public eye – and remembered how Beatles icon John Lennon had suffered a terrible fate at the hands of Mark Chapman.

“This is scary. You can’t discount these things because although it may come to nothing, sometimes it can be very serious,” he continued.

One person who does not seem to currently be much of a fan of Pete is his ex Katie Price.

She matter-of-factly slammed him for being her least favourite partner during an interview on Good Morning Britain earlier today.

Host Piers Morgan asked the former glamour model who her “worst” ex was.