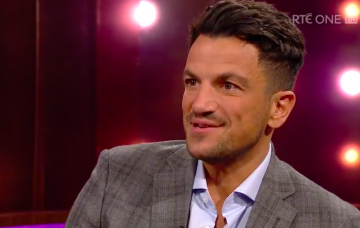 Peter Andre reveals full extent of his anxiety and depression

The singer has really been through a lot

There are few celebrities we can think of who are as smiley and positive as Peter Andre.

But behind his happy exterior, the singer has been hiding crippling anxiety and panic attacks – an issue he’s now opened up about coping with for TEN years.

The 45-year-old reality star spoke about his mental health in an interview on RTE’s The Ray D’Arcy Show, admitting he was even hospitalised at one point.

“Some people look at it like a taboo – but the truth is, it’s so real. So many people are going through it.”

The nineties singer went on: “I went through it for years. It was a moment – it was in 1998 – I was at the top of everything and all of a sudden it just hit me like a tonne of bricks.

“I couldn’t function. I couldn’t think straight. I was having panic attacks. I ended up in all sorts of hospitals, on medication, different therapists.”

And the dad-of-four, who is now married to junior doctor, Emily MacDonagh, suffered in silence, adding: “My parents didn’t know anything, I didn’t want them to know anything because they’re worriers. I got through it. It took me nearly 10 years.”

In fact, Pete says surviving such an ordeal made him into the positive person he is today.

He said: “I remember praying and saying, ‘Please, if I get another chance, if I can get through this period, I will never take it for granted.’

There are no words for this throwback. Nothing. Zilch. ZERO #leatheronleather #throwback #sorry

“And when I did get through it and things came back and I got to do all these wonderful things, I don’t take it for granted.”

Read more: Strictly’s Kevin Clifton thanks singing coach ahead of Rock Of Ages

The TV star’s fans rushed to send their love and wish Pete the best. One wrote: “We so so glad you did come back x think the world of you ❤.”

The singer – who is dad to Junior and Princess from his first marriage to Katie Price, and Theo and Amelia with Emily – also spoke about his popular music from the nineties – admitting Mysterious Girl “just won’t die.”

"It just won't die", @mrpeterandre talks about the success of Mysterious Girl.

He added: “I’m so lucky… every year it grows, every summer. It’s great.”

What do you think of Pete’s admission? Leave us a comment on our Facebook page @EntertainmentDailyFix and let us know what you think.