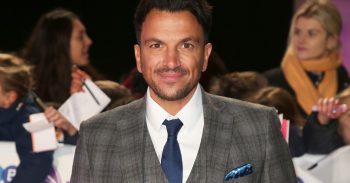 The singer speaks out on the explosive allegations

Peter Andre has given his thoughts on the controversial Michael Jackson documentary, Leaving Neverland, despite saying he has not watched it.

The 46-year-old singer, who counts Michael as one of his idols, said we must wait for “evidence” of what Wade Robson and James Safechuck are claiming, and said he will be ‘heartbroken’ if the accusations are true.

The Channel 4 documentary aired last week and shocked many viewers with its graphic content as Wade, 36, and James, 40, allege that Michael sexually abused them as children.

In his latest new! magazine column, dad-of-four Pete revealed why he hasn’t yet watched the film.

He explained: “I chose not to watch the film. I will eventually, but it’s going to be very uncomfortable and the thought of any of it being true is going to break my heart.”

The Mysterious Girl singer also added: “We cannot and must not ignore the voices of any victims, but what if he didn’t do it?

“For me, this is where the problem lies. Shouldn’t we wait for some sort of evidence?”

It comes after Peter defended Michael’s legacy before the documentary aired.

In his previous magazine column, Pete said Michael’s music shouldn’t necessarily be banned because of the accusations against him.

Several radio stations have stopped playing the Thriller star’s songs since the allegations came to light.

In footage of Wade winning a dance competition in Australia as a child, a young Peter can be seen in the background. Reportedly, Australian-born Pete came runner-up to Wade in the competition.

Michael died in 2009 from cardiac arrest aged 50. In 2005, he stood trail for allegations of sexual abuse and was acquitted, something Pete pointed out in his column last week.