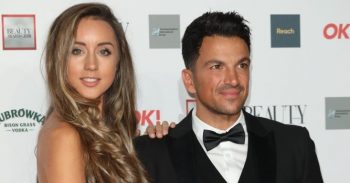 The singer has launched a new career as an actor

Singer Peter Andre has thanked his wife as he launches a new career as an actor.

The star has been working in Hollywood and is currently over there promoting his latest venture.

But the 46-year-old took time out from appearing at the premiere of his new short film The Inheritance to praise wife Emily.

Read more: Peter Andre reveals the full extent of his anxiety and depression.

Posting a picture of them together on Instagram, he said: “For the first time in 45 years things are looking incredible for me here in America and I’m so grateful.

“Through it all, you Emily are my rock and I love you. I’m putting it on here so everyone knows what a legend you are.

His acting debut has been praised by critics and he was nominated for the Best Actor award at a recent film festival.

Forever grateful. What a day. Performing my penultimate show for my 25 year anniversary tour. For tickets to the o2 Indigo tonight , link in bio. Also announced today that our film ‘The Inheritance’ has been nominated for the Manhattan film festival. So that’s 2 for Hollywood and 1 for New York. Reach for the stars and occasionally you will land on one. Thanks to all involved @jeff_sherid @jhickox @caitlinalyn @yaara @derrickcohan

Meanwhile, Peter – who also has Princess, 11, and Junior, 13, with his ex-wife Katie Price – recently claimed he and Emily were thinking about having another child, and would make a decision on the size of their family within “the next year”.

When asked if they’d want a third tot, Peter said: “It’s so funny because we’ve had this chat over and over again now. We can’t decide. In the next year we will know. We will know if we’re gonna go for it or not.”

But shortly after his confession, Emily insisted in her OK! column she isn’t ready for a third child and is “really busy” focusing on her career, and doesn’t want the Mysterious Girl hitmaker “changing nappies” at the age of 50.

She said: “Pete recently said that we’d been chatting about another baby. I’d say never say never when it comes to a third child, but it’s 100 per cent not happening at the moment as now is not the right time.

“I’m really busy and I’m focusing on my career. Pete also said he doesn’t want to be changing nappies when he’s 50, but that still gives us a couple of years! In a couple of years, Theo will be going to school so maybe we will then.”

Do you think Pete and Emily make a good couple? Leave us a comment on our Facebook page @EntertainmentDailyFix and let us know what you think.