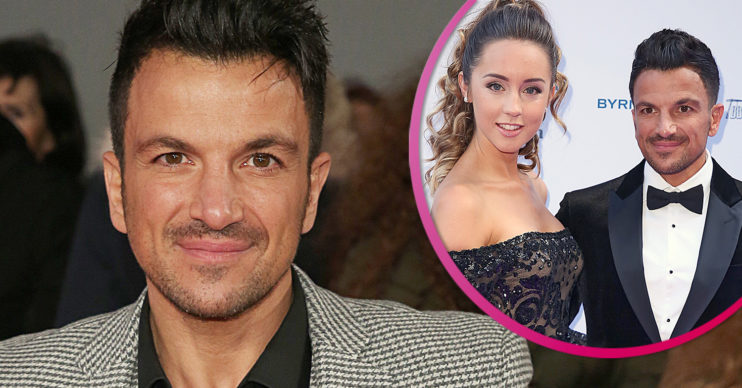 Peter, 47, wrote of how he and Emily, 30, are celebrating five years of marriage and ten years as friends.

Taking to social media he shared a slew of romantic videos from their luxurious 2015 wedding.

Here they can be seen celebrating their big day with dancing, family photos and an epic fireworks display.

Sharing with his some 1.5 million Instagram followers, Peter wrote on one of the videos:

Another caption includes: “When a man loves a woman. #10yearsfriendship5yearsmarriage.”

Peter and Emily’s celebrity pals flocked to comment on the videos.

“The most gorgeous couple”

Christine McGuinness wrote: “Happy Anniversary to the most gorgeous couple!”

And Scarlett Moffatt posted a series of heart emojis.

Meanwhile dozens of fans wrote on what a fantastic couple they make.

One fan gushed: “I can see she’s a lovely, kind, amazing, beautiful woman with a big heart.

“Same goes to you as a man fantastic couple happy anniversary.”

When a man loves a woman ❤️#10yearsfriendship5yearsmarriage

A second fan praised: “Oh my goodness, how stunning did Emily look, such a lovely couple happy anniversary.”

And a third congratulated: “Stunning you’re a lucky guy, Pete.”

How did Peter and Emily meet?

Peter and Emily met in 2010 when she was a medical student (she is now an NHS GP).

Emily’s doctor father treated Peter after he suffered from a severe bout of kidney stones.

Peter thanked him by inviting him to his Plymouth concert. Here he was introduced to his daughter Emily – and the rest is history!

They went on to have two children, daughter Amelia, six, and son Theo, three.

Peter, who was married to Katie Price from 2005 to 2009, also has son Junior 15, and daughter Princess, 13 with the former glamour model.

He has continually spoken of how much he is in love with Emily.

The GP has been working throughout the coronavirus pandemic, and Pete has praised her noble efforts.

He even revealed that she secretly battled the virus herself.

Speaking to The Sun, he said: “Emily became ill when the cases were soaring. Nobody knew the symptoms, not all doctors wore masks and Emily was very exposed.”

He added that although she has tested positive for antibodies, this doesn’t guarantee that she is now immune to COVID-19.

“Just because she’s had it doesn’t mean she’s immune. Is she even more likely to get it again?”