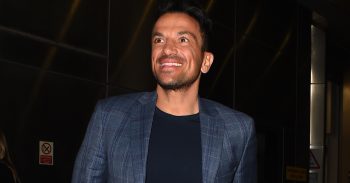 Peter Andre opens up about rivalry with Ant and Dec

Singer revealed past tensions with the presenting duo

Pop star Peter Andre has opened up about his rivalry with presenting duo Ant and Dec.

The singer appeared in Channel 5 documentary The Comeback of Ant McPartlin where he spoke about his relationship with the pair in the early days of their careers.

The documentary, which aired last night, delved into the Ant’s recent troubles, including his struggles with addiction and a drink driving conviction, and his return to screens this year.

It also looked at Ant’s rise to fame, alongside his longtime presenting partner Dec Donnelly.

The pair tried to carve out a career as pop stars under the name PJ & Duncan – named after the characters they played on CBBC’s Byker Grove.

They were fighting for their place on the charts alongside Peter – as well as pop starlet Dannii Minogue – and the group apparently had a bit of rivalry going.

In his appearance on the documentary, Peter revealed that the four competing stars all lived in the same building, and tensions often arose between them.

“Myself, Danni Minogue and Ant and Dec all lived in the same apartment block,” he said.

“I used to throw parties constantly, and I can remember them banging their broom on the ceiling because they were complaining because the music was too loud.”

He went on to say that the competitiveness between them impacted how they related to each other in person.

“Every time we saw each other it was kinda like, yeah…we were all rivals you see, because everyone wanted to fight for the top spot of the headlines,” he said.

But his revelations didn’t go down well with all viewers, as several people took to Twitter to claim that it was too early to be putting Ant under a microscope, and that the celebs who appeared on the documentary were ‘betraying’ him.

It’s funny, all I can think of right now is how @antanddec would NEVER do a show like this and stab someone in the back or gossip about a fellow celebrity. Sorry @MrPeterAndre – lost a lot of respect for you tonight. #thecomebackofantmcpartlin

Very, very poor timing of @channel5_tv programme #ThecomebackofAntMcPartlin as he has just started his comeback. Give the man some space to make his comeback, not a trial by cheap television.

So soon after his comeback to tv and you bring back all his memories. This might be still very raw to him. #TheComebackOfAntMcpartlin

A few years on, when he’s in a better place, would have been a more appropriate time for this. It felt like a rushed cash-in on his problems and we don’t know how raw the accident memories are for the other families so that should have been considered.#TheComebackOfAntMcpartlin

So let me get this straight….. a man who is in recovery and has just returned to work, you think the best thing is to dredge up his past his poor relationship with his father all to get ratings!?….what a bunch of vultures you all are at @channel5_tv #TheComebackOfAntMcpartlin

shame on channel 5 for the #TheComebackOfAntMcpartlin, the guy has serious issues which he’s been working on, has just come back to work, and needs help and support. also it makes it out that being a typical teenager and being an intorvert is a bad thing

Ant only recently returned to the presenting stage after taking a year off to deal with his addiction issues.

His absence meant that Dec was left to present Britain’s Got Talent alone, while Holly Willoughby joined him in Ant’s place for I’m A Celeb.

Ant and Dec reunited earlier this month as the new series of Britain’s Got Talent kicked off.

What do you think of Peter’s comments? Head over to our Facebook page @EntertainmentDailyFix and let us know what you think of this story.