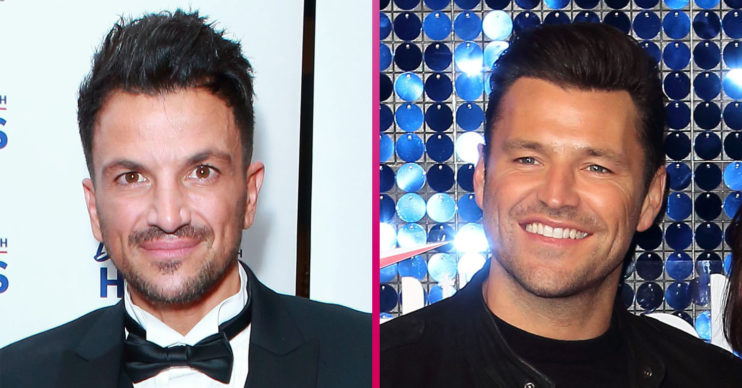 Fans thought Peter had put socks down his boxers!

Peter Andre was mocked by fans after showing off his bulge in an Instagram photo.

The singer copied Mark Wright by stripping to his underwear for a topless snap.

Former TOWIE star Mark had shared an image of himself to his Instagram as he sipped on a cuppa.

Peter Andre shows off bulge and gets mocked by fans

Peter’s picture showed him in a pair of boxers as he showed off his ripped bod.

Sharing side-by-side shots, the star wrote: “With all this talk circulating I guess I better ask who wore it best?

Meanwhile, fans poked fun at Peter, with some asking him if he had stuffed socks down his pants.

One person said: “How many socks Pete?” to which Peter replied: “Not this time luv.” [Sic]

Another commented: “Is that a scoop of gelato down there or are you just pleased to see us?”

So that’s where all the socks have been going.

A third wrote: “When can I have my socks back lol.”

One added: “So that’s where all the socks have been going.”

Peter recently divided fans as he showed off a tattoo on his neck.

The singer posted a selfie which showed him sporting a huge inking on the side of his neck.

Fans speculated over whether the tattoo was real as one person wrote: “Don’t like neck tattoos, blooming awful.”

Another said: “What’s on your neck.”

However, Peter explained it was for a film role during an appearance on Loose Women earlier this week.

Peter said on the daytime show: “This is not mine and the beard is even been a bit fuller because I can’t grow it properly.

“I’m on set for a film so I was there this morning and I’ve come here and then I’m going back to do it this afternoon.

“It’s semi [permanent]. I had scars, you saw me,” gesturing to host Eamonn Holmes.

Peter admitted: “I like the tattoo!” to which his wife Emily joked: “You think it makes you look cool!”