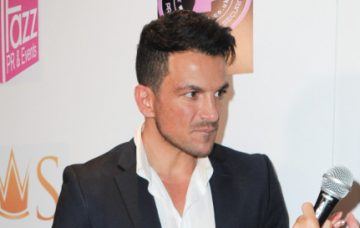 Peter Andre has ignored criticism over ex-wife Kaite Price as she heads to rehab – posting a cute message about wife Emily.

Katie’s mum Amy blasted Peter over his treatment of the glamour model, saying all her exes were partly to blame for her struggles.

“All the men in her life have used Katie, and never, ever leave her alone,” she said, speaking to The Sun. “And nearly all have been with her to raise their profile.

She went on to say that the three men provoked Katie, who then sometimes overreacts and lashes out.

“They all know that Kate is not perfect and they all know that if they wind her up she will react,” she said. “Kate is stupid for reacting, but these men need to look at how they are behaving and take some responsibility.”

Katie has checked into the Priory for treatment after several drink and drug binges caused her family to step in.

She’s been diagnosed with co-morbid post-traumatic stress disorder and is set to receive 28 days of treatment at the luxury clinic.

But ex-husband Peter – who has two children with Katie – has refrained from public comment on the situation, instead posting an adorable family shot to Instagram.

He posted a picture of wife Emily’s white BMW, sitting next to the couple’s son Theo’s tiny toy version.

A few days ago the pop star shared a video of Theo driving the toy car around the driveway – showing that he’s not quite learned to watch where he’s going.

Peter has reportedly refused to allow his two older children, Junior and Princess, to return to Katie’s home due to his concerns over her partying habits.

If Katie’s stint in rehab is successful, it could mean she regains her shared custody rights over her kids.

Do you think Peter is responsible for Katie’s problems? Leave us a comment on our Facebook page @EntertainmentDailyFix and let us know what you think!