Petre Andre recently welcomed the birth of his son with wife Emily MacDonagh, which is happy news right?

According to some people, it’s not.

The singer has had enough and hit back at trolls who claimed that his wife giving birth isn’t news.

One Twitter user was not complimentary to the pair, he wrote: “#NotNews”.

The Mysterious Girl star wasn’t about to ignore the comment, he instead politely responded to the rude message.

He wrote next to a grinning emoji: “Yeah but too much negativity in the world. We need something positive.”

You couldn’t have said it better Pete!

Fans could not agree more, and rushed to his defence.

One wrote: “God they need to bore off. it’s AMAZING news about your beautiful baby boy!” 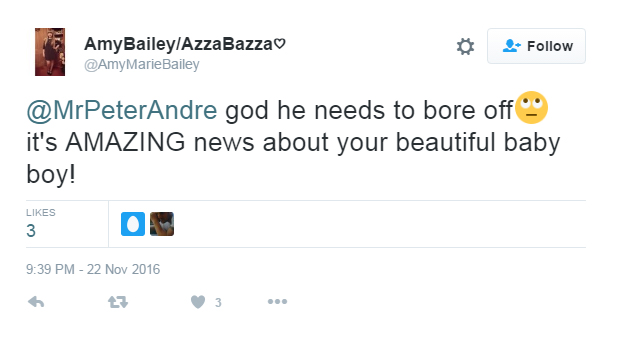 The newborn is the couple’s second child, joining two-year-old Amelia.

A spokesperson for Pete told The Sun: “Peter and Emily are both extremely happy.

“Both mother and baby are doing fine.”