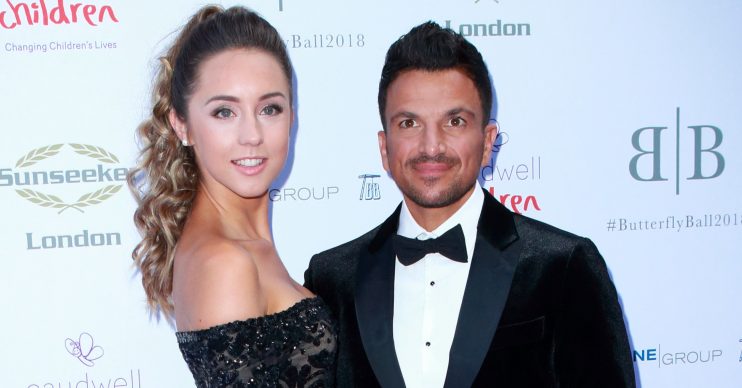 Fans have accused him of being "broody"

Peter Andre has hinted he would like to have more children following the arrival of the new royal baby.

The Duke and Duchess of Sussex welcomed their first child, a son called Archie Harrison, on Monday (May 6) and showed him to the world in his first photocall on Wednesday (May 8).

Read more: Peter Andre apologises to fans for his “annoying” voice as he shares family video

Alongside a photo of baby Archie and a snap of Harry and Meghan with their son, Peter wrote: “Ah can’t stop posting these pics. Emily help!!! Beautiful just beautiful. Congratulations.”

One person said: “A bit broody Pete!?” while another wrote: “You’re gonna be broody, I spy another baby in the Andre household coming soon.”

A third added: “A bit broody Peter? You and Emily should have more.”

He has Amelia, five, and Theo, two, with wife Emily.

Earlier in the year, Peter – who’s been married to doctor Emily, 29, for almost four years – told MailOnline that the couple had talked about a third baby.

“It’s so funny because we’ve had this chat over and over again now,” he said: “We can’t decide. In the next year we will know. We will know if we’re gonna go for it or not.”

Last week, the singer sparked rumours that he was set to be a dad for the fifth time after a cryptic Instagram post.

The Instagram post, which read, “Some exciting news… I’ll tell you Monday,” sent fans into a frenzy.

Thousands of his followers took to the social media platform to speculate whether the couple were expecting.

One fan asked: “Another baby on the way??” adding prayer emojis afterwards.

Another fan asked: “Another little Pete or Emily?” while a third added: “It’s got to be another baby or a new album.”

Have a whopper day 🙂

Peter later cleared things up and revealed the news was actually that he had signed a deal with a US management team.

He wrote: “Just signed a deal with the fantastic John Ferriter and the Alternative group. He will be my manager for America/South America and Canada whilst my wonderful manager of 25 years Claire will continue to manage me for the rest of the world.

“P.s I know it wasn’t news of a baby but Meghan M[arkle] will give you that.”

Do you think Peter and Emily will have any more children? Let us know what you think on our Facebook page @EntertainmentDailyFix.