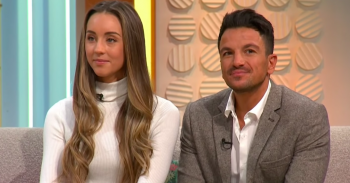 The more Andres the better, as far as we're concerned

We really don’t know where Peter Andre gets his energy from.

The busy dad-of-four has admitted he and wife Emily MacDonagh are talking about adding to their already-pretty-sizeable brood, confirming they will decide whether to have another baby “in the next year”.

Speaking to the MailOnline, the singer confirmed: “It’s so funny because we’ve had this chat over and over again now. We can’t decide. In the next year we will know. We will know if we’re gonna go for it or not.”

He also praised his wife of four years, saying: “She’s absolutely stunning. Let’s not forget that side of things. She’s a 10 out of 10. She’s just stunning in every way. It just so happens that she’s also very kind and very smart as well.”

Speaking to OK! magazine, she said: “Theo has been getting on so well but recently he has been a little bit temperamental, so I think some of the terrible twos have started!

“With Millie at that age I was quite firm from the beginning and I didn’t reward the behaviour so she just got over it. I’m going to try the same with him but he’s a little more demanding than Millie.”

The Mysterious Girl singer – who has spent the past couple of months on a tour in the UK – has often spoken about feeling broody, but his wife always seemed, er, less keen.

She recently admitted to OK!: “He wants one more child but I can’t say I’m on the same page at the moment.

Let’s face it, Pete does make adorable kids. Better get as much sleep in now while you’re still able…

Do you think Pete and Emily should have another baby? Leave us a comment on our Facebook page @EntertainmentDailyFix and let us know what you think.