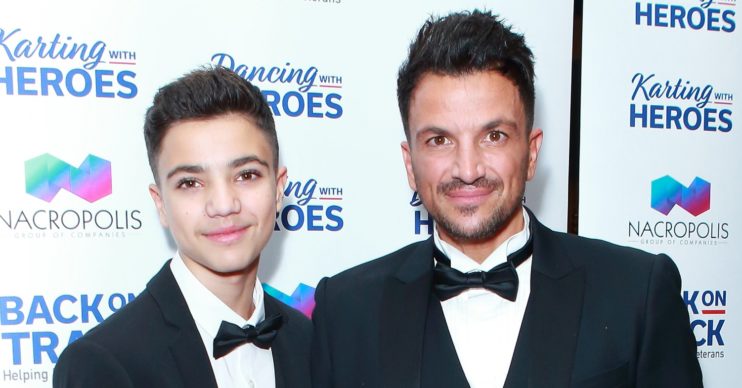 Reality star Peter Andre was left grossed out when his teenage son Junior made a seemingly innocent comment about puberty ‘changes’.

On Instagram on Monday (June 15), the Mysterious Girl singer and dad of four, 47, shared a throwback of himself and his eldest son, who turned 15 over the weekend.

“Love this pic of us @officialjunior_andre,” Peter said, tagging Junior in the nostalgic post.

What did Junior say?

Read more: Peter Andre and wife Emily to have two more kids in the next three years

It showed them striking a similar pose, both wearing jeans and a white T-shirt and Junior looking noticeably younger than he does today.

But unlike his dad, the teenager didn’t appear to be a fan of the picture.

“How puberty has changed me,” he wrote, alongside nauseated and laughing-crying emojis.

The TV personality’s response quickly racked up dozens of likes from his followers, some of whom were in hysterics.

One follower said, “Best comment of the day” while another wrote, “Haha hilarious, grossing Pete out”.

A third said, “He looks so much like you” and Peter joked, “Yeah, poor thing”.

In a birthday tribute to Junior on Saturday (June 3), Peter told fans that he and the lad’s mum, ex Katie Price, are “friends”.

The former couple were married for four years after meeting on I’m A Celebrity… Get Me Out Of Here! in 2004 and share two kids together.

Katie had already noted on her Instagram that she and Junior’s dad had “done a good job” in raising him.

Fans were delighted to see Peter comment on Katie’s upload in happy agreement. He replied, alongside three thumbs-up emojis: “He’s a good boy. I’m so so proud.”

Happy birthday to my brother @officialjunior_andre

One of Katie’s followers then told Peter: “This is lovely, commenting on each others’ status. Lovely to see.”

And he wrote in response: “We’re friends and she’s [his] mummy, so of course.”