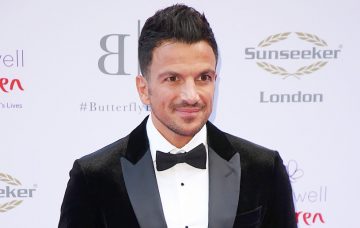 Peter Andre has been forced to pull out of a concert after being struck down with a nasty bout of “sickness” while in America.

Peter, 45, has spent the past week in Florida with his children Junior, 13, and Princess, 11, and was due to fly home ahead of the gig tonight (Saturday) in Great Yarmouth.

But taking to Instagram in the early hours, Peter told his followers that he had become ill ahead of the journey back to the UK.

Alongside a cartoon drawing of a man clutching his stomach, the Australian singer said: “Oh man. Not feeling well.

Within hours, Peter’s agents had issued a statement telling fans the concert has been postponed.

It said: “Peter Andre has been taken ill with sickness following his trip in America.

“It is with regret that we have to postpone Peter’s An Evening With at Great Yarmouth due to ill health.”

Those planning to attend were assured that a new date is to be announced in due course, but that any requests for refunds would be honoured.

Following the news, Peter – who was also working on his 2019 calendar in Florida – has been inundated with get well wishes from his army of fans.

Another added: “If he has a sickness bug then I feel really sorry for him, I had it and you can’t get out of bed never mind do a show.”

News of Peter’s illness has come days after he told fans he had been struck down with sea-sickness during a fishing trip in Florida.

Sharing a not-so-glamorous photo of himself leaning over the side of a boat, the dad-of-four told his Instagram followers: “So first I chucked up :(( #loveflorida #realcortezcharter#h20watersports.”

But he later insisted it had turned into an “awesome day”.

Remembering his words, several fans have since questioned whether this is still the cause of his current “sickness”.

One tweeted: “Yeah sea fishing will do that to you. Happens every time I went.”

Another added: “Motion sickness!!! Need to avoid boats at all costs now. I won’t even go on a boat on a lake!”