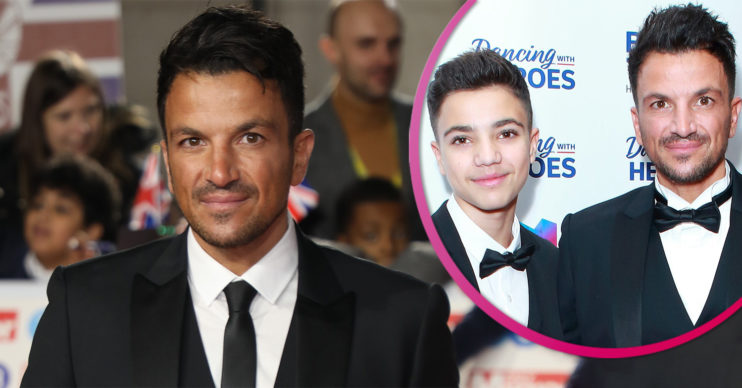 Peter Andre’s son Junior is ‘growing up so fast’ as he cooks family BBQ, say fans

The proud dad has taught his son some serious life skills

Peter Andre has left fans in amazement at just how grown up son Junior is as he treated the family to a BBQ.

The dad-of-four took to Instagram to share a clip of the 15-year-old making dinner last night (July 20).

In the video, Junior can be seen carefully tending to the BBQ in the garden of their Surrey home as dad Peter cheers him on in the background.

Give your son food he’ll eat for a day. Teach your son to cook he’ll eat for a lifetime…… if he gets a job and buys food and actually cooks….. init? @officialjunior_andre #lifeskills @bobmarley

Junior appeared at ease whilst cooking up a storm and jamming out to Bob Marley.

Read more: Katie Price reveals son Harvey is ‘on the road to recovery’ but remains in hospital

“If he gets a job and buys food and actually cooks….. init? @officialjunior_andre #lifeskills @bobmarley.”

The proud dad later shared a snap of Junior’s meal and gushed: “I mean….. c’mon.”

Peter Andre’s son Junior is ‘all grown up’

Fans couldn’t believe how grown up Junior appeared, with one commenting: “Junior is growing up so fast.”

Another wrote: “He is a credit to you and Kate. Both amazing parents.”

A third added: “Very true teach them while their young he’s growing up so fast its crazy.”

While mum Katie Price said: “You can do me a bbq soon.”

Peter and ex wife Katie are currently back on speaking terms.

Last week, the Aussie star shared a message of hope for Katie’s 18-year-old son Harvey after he was suddenly rushed into hospital.

Following the news, Peter shared an image of praying hands along with “Praying,” followed by sad faces.

Meanwhile, the couple’s 13-year-old daughter Princess said: “I love you Harv soo much! You’re going to be fine! Think about the positives and not the negatives.”

Peter also recently took to Instagram to share a beautiful tribute to his wife Emily Andre on their fifth wedding anniversary.

The reality star posted a slew of romantic videos from their luxurious 2015 wedding to mark the special occasion.

He wrote on one of the videos: “You’re funny, kind, intelligent and stunning. Happy 5th wedding Anniversary Emily.”

Another caption included: “When a man loves a woman. #10yearsfriendship5yearsmarriage.”

How did Peter Andre and Emily meet?

Peter and Emily met in 2010 when she was a medical student (she is now an NHS GP).

Emily’s doctor father treated Peter after he suffered from a severe bout of kidney stones.

Peter thanked him by inviting him to his Plymouth concert. Here he was introduced to his daughter Emily – and the rest is history!

They went on to have two children, daughter Amelia, six, and son Theo, three.

He has continually spoken of how much he is in love with Emily.

The GP has been working throughout the coronavirus pandemic, and Pete has praised her noble efforts.

He even revealed that she secretly battled the virus herself.

Speaking to The Sun, he said: “Emily became ill when the cases were soaring. Nobody knew the symptoms, not all doctors wore masks and Emily was very exposed.”

He added that although she has tested positive for antibodies, this doesn’t guarantee that she is now immune to COVID-19.

Peter went on: “Just because she’s had it doesn’t mean she’s immune. Is she even more likely to get it again?”