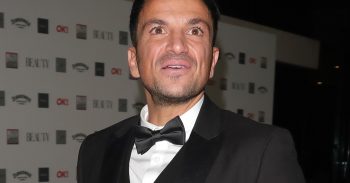 Peter Andre has claimed that Michael Jackson’s music shouldn’t be banned, despite the sexual abuse allegations against the King of Pop.

The Mysterious Girl singer made his comments ahead of a new documentary about Michael.

The late singer is the topic of discussion in new documentary Finding Neverland, which looks at the abuse allegations made against Michael by alleged victims Wade Robson and James Safechuck. The film is set to air this Wednesday on Channel 4.

Peter, 46, decided to give his view on the public debate about whether Michael’s music should be taken off the airwaves, pointing out that the American singer was acquitted of the charges against him in 2005.

In his New! magazine column, Peter explained: “There’s a new Michael Jackson documentary on this week and it has caused a lot of controversy about sexual abuse.

“First and foremost what I will say is we have to rely on the justice system and we mustn’t forget that he was acquitted of not just one, but all child molestation charges during his trial in 2005.”

He added: “You can’t just stop listening to an artist’s music due to accusations alone. And let’s not foget some of his songs weren’t even written by him.”

He also stated that Michael is not here to “defend himself”.

It comes as BBC Radio 2 reportedly decided to stop playing Michael’s songs, following the explosive allegations in the upcoming documentary.

However, dad-of-four Peter did also say that it would be “terrible” if the charges against Michael were proved to be right.

The Billie Jean singer died from cardiac arrest in 2009, aged 50.

He left behind his three children, Paris, Prince and Blanket.