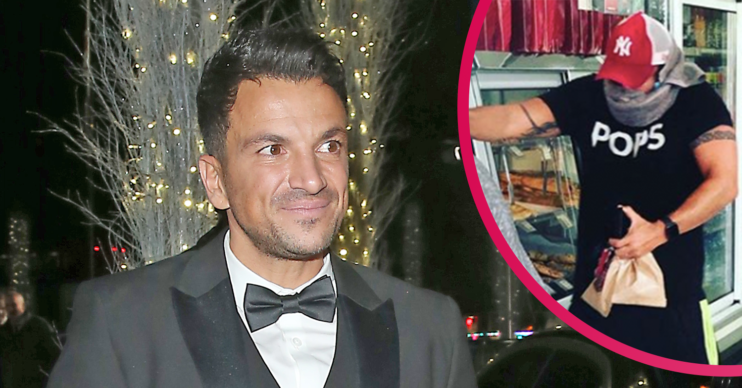 The Aussie star had only nipped out to buy some pastries

Peter Andre has blamed the coronavirus pandemic for making him ‘look like a criminal’ while shopping.

Peter, 47, was caught on camera during a trip to buy some pastries and thinks he looked very suspicious.

The Aussie singer had, however, wrapped a huge towel around his face after forgetting to take his mask!

He had also popped a baseball cap on his head before venturing inside the store.

In the comments, he added: “COVID making us look like criminals 😂.”

Pete’s fans have been quick to get on board with his joke, with one replying: “Give him the dough 🤣.”

Another chipped in: “Sorry but life is what you bake it!”

A third questioned why he had a towel wrapped around his head. Peter replied: “I forgot my mask 😂😂.”

Peter had nipped to the shops with wife Emily’s brothers – Sam, Will and Tom. He thanked them for taking the pictures, which were shared on Instagram.

How many kids to Peter and Emily have?

The Mysterious Girl singer tied the knot with Emily in July 2015.

They have two children together, six-year-old daughter Amelia and three-year-old son Theo.

The couple also co-parent Peter’s eldest two kids, Princess, 13, and 15-year-old Junior, who he had during his married to Katie Price.

Princess recently shared her feelings about step-mum Emily on the doctor’s 31st birthday.

Alongside a sweet snap of herself and Emily, she wrote on Instagram: “Happy birthday Emzzzzz love you.”

The teen also bought Emily a sewing kit, after she had overheard her saying she would like one.

Read more: The Chase’s Anne Hegerty has reportedly made £500,000 since I’m A Celebrity appearance

Emily has previously spoken about being a step-parent to Princess and Junior.

Writing in her OK! column in 2018, the medic admitted: “I think getting the balance right as a step-parent is crucial.

She added: “Coming into their lives taught me a bit about how to be a mum because they’re so wonderful.”