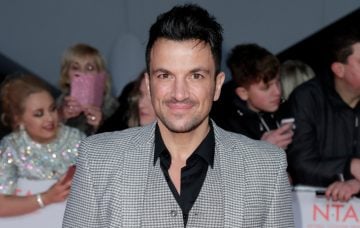 The singer is so thoughtful when it comes to his offspring

It’s hard to imagine what it would be like to bring up kids in the spotlight, but Peter Andre is dealing with it the best he can.

The singer has admitted to struggling with his older two children, Junior and Princess, and what they might end up reading online about their famous parents.

Writing in his column for New! magazine, the 45-year-old said: “It’s really hard to keep kids away from the internet because, even if you monitor it at home, kids at school have got the internet on their phones.

“It’s scary because as a parent there’s nothing you can do.”

The Australian star – who is now married to junior doctor Emily MacDonagh – shares Junior, 13, and Princess, 11, with his ex-wife, Katie Price.

Pete, who is also dad to Theo and Amelia with Emily, 29, added: “I get in there first. I’ve shown them pictures of when I had bleached hair and everything.”

Peter’s ex Katie has been making headlines over the past year about her marriage to third husband Kieran Hayler breaking down, her financial situation, and her split from her toyboy boyfriend Kris Boyson.

This isn’t the first time Peter has opened up about protecting his children from the internet.

During an appearance on Lorraine in September, he said he tries to protect his children from news stories and the internet by getting them to focus on other things.

He told host Lorraine Kelly that he tries to limit his kids’ internet usage because it can be a “scary place”.

Do you think Pete is doing right by his kids? Leave us a comment on our Facebook page @EntertainmentDailyFix and let us know what you think.