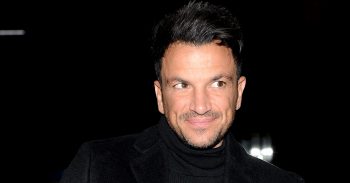 He's excited just to have been shortlisted

Peter Andre is in line for a top Hollywood acting award for his role in a new short film.

In what could turn out to be a huge boost for his acting career, the Mysterious Girl singer has been shortlisted for a Best Actor award at the North Hollywood Film Festival.

Pete, 46, took to Instagram to share the news with his one million followers and insist that he’s grateful just to have been nominated.

Read more: Peter Andre issues warning after his identity is stolen to scam fans out of thousands

Barely able to contain his excitement, he wrote: “Wow wow wow. I’ve been nominated for best actor at the North Hollywood Film Festival.

“Just being nominated is EVERYTHING. Nothing else needs to happen. So so happy.”

Pete had to swap his usual well-groomed look for the ragged appearance of a heroin addict when he took on the lead role in The Inheritance.

Forever grateful. What a day. Performing my penultimate show for my 25 year anniversary tour. For tickets to the o2 Indigo tonight , link in bio. Also announced today that our film ‘The Inheritance’ has been nominated for the Manhattan film festival. So that’s 2 for Hollywood and 1 for New York. Reach for the stars and occasionally you will land on one. Thanks to all involved @jeff_sherid @jhickox @caitlinalyn @yaara @derrickcohan

His fans gushed in the comments with congratulatory messages for the budding actor.

One wrote: “Wow. Perhaps this is the start of a whole new career for you @peterandre?? Exciting times.”

Another said: “Congratulations fingers crossed you win it, but if not what an achievement anyway, well done.”

A third chimed in: “That’s fantastic news, we will all have our fingers and toes crossed for you.”

It could be something of a turning point in Peter’s acting career.

He’s had a number of acting roles in recent years, including playing the prime minister in E4 mini-series Tripped and Australian racing car Ace in kids’ show Thomas & Friends.

He’s also appeared as himself in several films, including the Keith Lemon Movie and The Office sequel David Brent: Life on the Road.

Pete’s award nomination follows comments he made defending the music of Michael Jackson, amid calls for it to be taken off the airwaves.

Read more: Katie Price slammed for having ‘no respect’ after missing court date

Speaking ahead of the two-part Leaving Neverland documentary airing, he wrote in his New! magazine column: “You can’t just stop listening to an artist’s music due to accusations alone.

“And let’s not forget some of his songs weren’t even written by him.”

Peter later revealed that he has chosen not to watch the two-part film, but clarified: “I will eventually, but it’s going to be very uncomfortable and the thought of any of it being true is going to break my heart.”