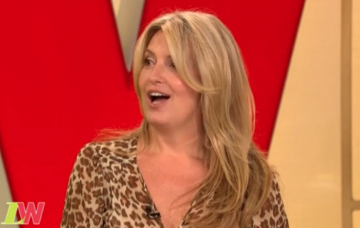 The panel were remembering the late Aretha Franklin when singer Rebecca Ferguson revealed she had performed Aretha’s hit track I Say a Little Prayer with Burt.

As Rebecca, 34, said it had been her dream to sing with him, Penny can be heard saying: “And he passed not so long ago.”

Rebecca was shocked and replied: “Did he? Oh wow.”

However, as the show returned from a break, Penny cleared things up and corrected her mistake.

Kaye Adams told her co-star: “Penny, I’m afraid we’re going to issue a bit of a correction here because news of Burt Bacharach’s demise has been much exaggerated.”

Slapping her hand, Penny said: “Apologies. I was hoping that was a whisper.

“Burt is still alive and well, I apologise, I think he is 90 and I saw a recent tribute and I got the wrong end of the stick.”

Viewers watching from home also spotted Penny’s mistake and called her out on Twitter.

“Burt Bacharach is very much ALIVE this is dreadful how on earth can Penny Lancaster get this so wrong,” another wrote.

Meanwhile on the show, Penny opened up about her relationship with music legend Rod Stewart.

She spoke about Rod’s recent interview in which he admitted he regrets occasionally swearing at her during arguments.

Penny revealed she challenged Rod about his antics and he publicly apologised to her for it during his interview.

She explained: “It’s not acceptable and no woman should be spoken to in that manner, whether it’s privately or in public.

Penny explained that she confronted Rod during a romantic night to themselves.

She said: “I said, ‘darling, I just have to express that I think you are really have to work on how you express yourself on occasions and saying it to me privately is not acceptable, but when other people might hear it, it’s even worse.'”

Speaking about how Rod apologised during his interview, Penny said: “I forgive you Rod!”