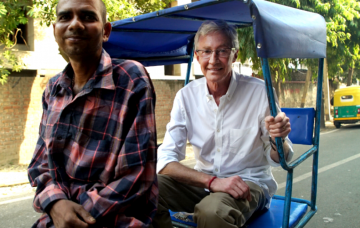 Paul O’Grady has recalled how he fell in love with an elderly dog while filming in India, but was unable to bring the animal home to the UK with him.

The beloved television presenter travelled to Delhi to film a new series of his For The Love Of Dogs, meeting the heroes who look after the city’s estimated 400,000 street dogs.

He visited the city’s oldest dog shelter and one dog in particular struck a chord.

Paul, 62, told TV Times: “A big, old, black lab cross, called Kalu. He was crippled with arthritis, cataracts, mange and he stunk! We clicked. He used to wait for me at the gates in the morning.

“I wanted to take him home to Kent with me but I couldn’t because he was top dog in the pack. Saying goodbye to him really broke my heart.”

Paul added to Best magazine: “They said he was so old he probably wouldn’t survive the journey and that the guy who ran the dog shelter would be broken-hearted if he left.”

For The Love Of Dogs: India is a four-part series.

Viewers will watch as Paul helps out at Delhi’s top dog shelter, where around fifty sick and abandoned dogs arrive every day including puppies who have been in car accidents and elderly dogs with health problems.

The television favourite is known for his compassion and love for animals.

He was given a special recognition award at the National Television Awards in January in honour of his work on shows including For The Love Of Dogs.

Paul previously told The Mirror: “Animals are instinctively drawn to me.”

He has dogs, goats, pigs, chickens, ducks and sheep living at his Kent farm, where he enjoys a quiet life away from the spotlight.

Back in 2015, he admitted to the Express he finds it hard walking away from dogs in need of a home once the cameras stop rolling.

“I don’t go home at 5pm and forget about them. I worry and then I start thinking, ‘Have I got room?’ But I’ve already got five dogs, four of them rescue dogs, and I can’t have any more,” he said.

(Though, he’s now thought to have six rescue dogs.)

Paul added: “Instead, I try to get friends to take them, so people avoid me now!”

Will you be watching Paul’s new show? Leave us a comment on our Facebook page @EntertainmentDailyFix and let us know what you think!