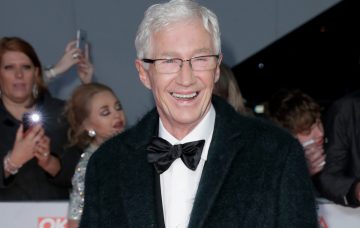 Former EastEnders icon Barbara, who was diagnosed with Alzheimer’s in 2014, had a pacemaker fitted after she fainted in her home in August.

TV host Paul told the Mirror he has visited Babs, 81, since she had the op – which was needed after her Alzheimer’s medication left her feeling dizzy and with breathing problems.

He also praised her husband Scott Mitchell as “remarkable” for how he is caring for her as she battles the illness.

Paul, 63, said: “She is doing really well, and he is remarkable, Scott. Since she has had the pacemaker, I’ve been to see her.

He added: “I used to look after people with Alzheimer’s and it really is hard. One minute they are really off the spectrum and the next they are lucid and saying, ‘I’m really sorry’ – it’s heartbreaking.”

Read more: Barbara Windsor’s husband reveals she briefly forgot who he was

Paul, who has been friends with EastEnders favourite Babs for thirty years, insisted earlier this year that the Peggy Mitchell star is still the person he has always known.

“We’re all here for her, but she’s still Barbara Windsor,” he told the Mirror. “I don’t want people to think she’s completely lost her mind, because it’s not true.

“It’s not the early stages but she’s still very much the Barbara Windsor I know. She’s a toughie and Scott is her rock.”

Earlier this month, Scott emotionally revealed on Loose Women that his worst fears had become real when Carry On legend Barbara momentarily forgot who he was as he helped her take a bath.

He said: “When Barbara first got this diagnosis my big fear was always, ‘What if one day she looks at me and doesn’t know who I am?’

“And that kind of haunted me, and two weeks ago, you know, that reality came.”

He added: “It was only brief, I was just helping her, she’d got out of the bath and she looked at me and was suddenly apprehensive, her eyes went blank and she went, ‘Sorry, who are you?'”