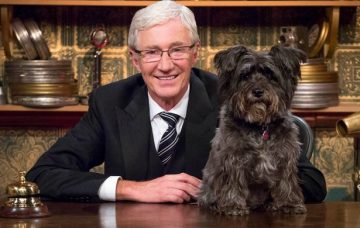 Paul O’Grady pays tribute to dog Olga after her death

Paul O’Grady has thanked fans for their love and support following the loss of his beloved dog, saying he was “devastated” to say goodbye.

Cairn terrier cross Olga, who had starred in her owner’s radio and TV shows, died earlier this month after her kidney failed.

Paul, who presents ITV’s For The Love Of Dogs, paid tribute to Olga during his Radio 2 show on Sunday night, saying she was “remarkable”.

“Thank you very much for all your messages. Last week’s show was a pre-record as I was looking after a sick little dog, my Olga.

“She only had one kidney as she’d had the other one out four years earlier as she had a tumour on it, so she did quite well, really.

“She was 13 years of age and she was tough as old boots that one, she was hard as nails, she was like a gangster’s moll in a dog,” he told listeners.

“She was a sweetheart.”

He continued: “On the Saturday we had to let her go. Look, if you are going to be a responsible dog owner you’ve got to do that. You can’t keep them on, not when they are in pain.”

Paul said Olga is buried in his orchard, adding: “It was all very, very sad, hideous. I was devastated, seriously. It is shocking.”

The star said he had trouble containing his emotions when he returned to work filming at a children’s hospital.

He said: “I go in the next day and they are giving me sweets and saying, ‘We’re sorry about your dog’, and it’s torture trying to hold it together for the cameras, especially when you are dealing with a really ill child.

“They are so resilient, they are not thinking about themselves.”

Paul went on to pay tribute to Olga’s fame, calling her his “showbiz” companion.

“She was fabulous, she was showbiz Olga! She used to sit on the desk, literally that’s all she did. That was the act! People would say to me, ‘Is she drugged?’ No she’s not! She has discipline, she is a daughter of the military!

“She’d sit there bolt upright and would sit on my notes so I couldn’t read them. I’d be waffling away and say, ‘Olga, move over! and she’d move further over and knock them off the desk!

“She was a remarkable little dog and I was lucky to have got her. When she came in, she was tiny and feral – a nightmare. But she matured into a very grand old lady, and she will be sadly missed.

“So thank you everybody for all your kind messages, I really appreciate it.”

Leave your messages for Paul on our Facebook page @EntertainmentDailyFix.