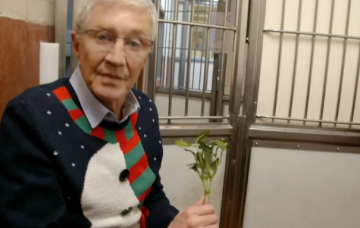 He's known for his love of dogs

The TV fave warns viewers they will be similarly distressed at sad scenes captured for his Christmas special, which airs tomorrow.

Paul, 63, explained to The Sun’s TV Mag: “There’s a delivery of dozens of tiny puppies with broken legs.

“There were two puppies who were thrown out of a moving car at three weeks old. And a Bichon Frise, who lost both her eyes after an infection had been left untreated.”

Paul mucks in with giving the pups any help they need though.

He added: “Hand-rearing puppies is the best. You bottle feed them, then you do what the mother would do – she’d lick them until they wee – so you have to rub them with a towel to make them wee!

“Some puppies have lived their lives in a cage and you see them blossom – it’s a Cinderalla story.”

Over the weekend, Paul gave fans an update on how Dame Barbara Windsor is doing, four years after she was diagnosed with Alzheimer’s.

The TV presenter revealed that the 81-year-old actress is still in good spirits, enjoying socialising and seeing her friends – who are impressed by the way she’s retained her long-term memory.

Paul also said that when Babs repeats herself, he just carries on and pretends he hasn’t “heard it before”.

Paul told The Sun: “Barbara is a sweetheart. We are in touch all the time. People write her off, but she’s doing really well. She went to the panto the other night and to 42nd Street.

“I ran into her and said, ‘What’s your mum’s Co-op number, can you remember?’ She told me, then said, ‘How the hell do we remember that?’ I said, ‘Do you remember me?’ And she said, ‘You’re hard to ever forget.'”

He also revealed that the former EastEnders icon – who had a heart op earlier this year – sometimes can’t remember what she’s just said, saying: “If she does repeat herself, you just answer it and carry on like you haven’t heard it before.”

The veteran TV star has been there for the Carry On actress from day one of her diagnosis.

He has also praised Barbara’s husband Scott Mitchell as “remarkable” for caring for her as she battles the illness, telling the Mirror in October: “She is doing really well, and he is remarkable, Scott. Since she has had the pacemaker, I’ve been to see her.

He added: “I used to look after people with Alzheimer’s and it really is hard. One minute they are really off the spectrum and the next they are lucid and saying, ‘I’m really sorry,’ – it’s heartbreaking.”

Have you ever adopted a rescue pet? Leave us a comment on our Facebook page @EntertainmentDailyFix and let us know.

Paul O’Grady: For The Love Of Dogs At Christmas airs on Christmas Day at 5.55pm ITV.