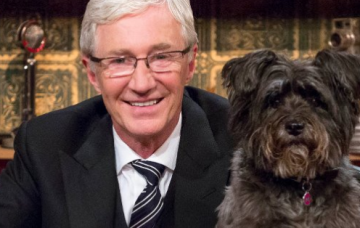 Paul O’Grady has spoken of his grief over seeing his darling dog Olga put down, after she lost her battle with kidney failure.

The presenter’s favourite pooch – who had appeared with Paul many times on TV and radio – had been successfully treated for cancer in 2014, but it had left her with just one kidney.

Paul spoke fondly of the 14-year-old Cairn terrier, as he opened up about her passing and burial yesterday, the Mirror reports.

“I held her and off she went,” he said. “I buried her myself in the orchard. She was widely loved. She had her own fan club.”

Paul added: “I’m really sad but there was no choice but for Olga to be put to sleep.

“She was ready to go. At least I will have a good night’s sleep now. I have been up with her for two nights on the sofa.

“She’s been up in the night vomming and things. It’s the hardest thing to do but it’s the only thing to do.

“I knew it wasn’t Olga any more, she was a state. I shed my tears earlier on in the week.

“It’s heartbreaking. but she had a great life. She loved television studios.”

A source added to The Sun: “Paul is utterly devastated. Olga was put on an intravenous drip to flush out all her toxins, but it was a temporary measure and the vet said she would need to be put down.”

The 62-year-old television favourite returns to ITV on Thursday with For The Love Of Dogs.

He has spoken about how he always lost his life from renal failure after playing with wounded hounds while filming on the streets of India.

Supporters of Paul, who loved watching his companionship with Olga, have posted condolences on Twitter.

Aw, Paul O’Grady’s dog Olga has died. She was such a beautiful girl, loved to see her when he did the teatime chat show. He must be devastated.

Awwww Gosh What a Lovely Dog She Was
On Paul O’Grady Show Bless RIP OLGA !

@paulogrady @batterseadogs56 So sad to hear that Paul O’Grady’s darling dog Olga has lost her battle. I know how much it hurts to lose such a huge part of you family. Thinking of you Paul 💔💔😢😢

So sorry to hear this, I loved watching Olga on The Paul O’Grady Show she was adorable, a true character, love to Paul at this sad time xx