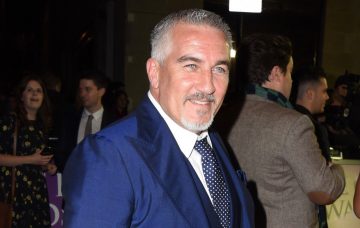 She is no longer angry at the GBBO host

It’s been a year since their marriage fell apart, and now Paul Hollywood’s ex-wife, Alex has broken her silence.

Comparing the divorce to a bereavement, the Great British Bake Off star’s ex admitted she needed to give herself time “to get [my] head round it.”

Speaking to Prima magazine, Alexandra Hollywood – who was married to Paul for 19 years – said: “No one should underestimate how separation and divorce can hit you…

“I went through the same five stages of grief that a bereaved person does [denial, anger, bargaining, depression and acceptance]. You go there in your own way, but I think it’s healthy to do that.

“Being able to be weak is a strength, too, and it’s okay to sit and have a cry.”

She added: “I compare it to a moment where you’re driving along the motorway and then the next moment, something beyond your control happens and you’re driving in a completely different direction. You have to give yourself time to get your head round it.”

Alex also insists she is no longer angry with Paul, despite claiming in court documents that he had cheated on her; divorcing him on the grounds of adultery.

Alex and Paul, 52, married in 1998 after meeting in Cyprus. They have son, Josh, now 16, but it wasn’t all plain sailing. They split up in 2013, when the presenter had a fling with American chef, Marcela Valladolid.

The blue-eyed star and Marcela split up a few months later, with Paul admitting: “I made the biggest mistake of my life and I regret it.”

He and Alex reunited but confirmed the end of their marriage five years later in November 2017.

In a joint statement, they announced: “It is with sadness that we have decided to separate.

“Our focus continues to be the happiness of our son, and we would ask the press and public to allow us privacy as a family during this very difficult time.”

Summer recently opened up about the age-gap between her and Paul, saying: “I’m fine and I’m enjoying life. I’m not upset… I’m happy. Why should it bother me?

“There are many other people in the world with age gaps, and marriages and kids and everything else and I’m fine.”

Do you think Alexandra has handled the split well? Leave us a comment on our Facebook page @EntertainmentDailyFix and let us know what you think.