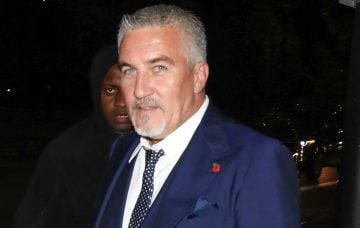 Paul Hollywood and girlfriend ‘buy puppy to test their relationship’

Reports claim the couple are considering having a baby

Paul Hollywood and his girlfriend Summer Monteys-Fullam have reportedly bought a puppy to test whether they should start a family together.

The Sun claims that the pair have bought a Rottweiler as a trail run for a potential baby.

A source told the publication: “Paul and Summer have got a Rottweiler as a puppy.

“Her sister, Saskia, posted on Instagram with a photo of the dog saying she is looking after it for a few weeks for its mummy, ‘S bunny’, who is Summer.”

It comes after Summer’s sister Saskia posted a photo of a Rottweiler puppy to Instagram, claiming she was dog-sitting for a few weeks.

“Puppy sitting this beast for a few weeks while his mummy is away…” Saskia captioned the post. “I’ve grown too attached to him! Who thinks S Bunny will just have to buy another one and I’ll keep this brute??”

The Sun also claims that ‘S Bunny’ is a reference to Summer – who uses the nickname as her user name on her Instagram account, which is set to private.

Saskia posted another shot of the pup to Instagram Stories, calling him a “specimen”.

Paul split from his wife of 20 years Alex in 2017 following an alleged affair with bartender Summer. The couple have a 31-year age gap.

Another source told The Sun that friends were joking that Paul’s choice of pet was to keep Alex away.

“Friends have joked he picked a Rottweiler to keep his ex-wife away,” the source said.

Ent Daily has contacted reps for Paul for comment on this story.

This comes after reports claimed that Alex and Summer had a public confrontation in a Marks and Spencer in Kent.

What do you think of Paul and Summer’s new pet? Leave us a comment on our Facebook page @EntertainmentDailyFix and let us know what you think of this story.