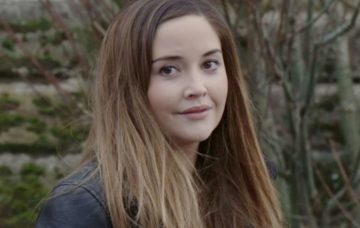 EastEnders viewers aren’t quite sure whether Lauren Branning has left Walford.

They were left completely confused as Lauren said a tearful goodbye to her sister Abi as she was laid to rest, before walking off and seemingly deciding to end her relationship with boyfriend Josh, without telling him.

As she left the funeral, Lauren walked to a waiting Josh and baby Louie, before things took a silent twist.

Instead of getting into the car packed with all their belongings for their move to Glasgow, she took Louie by the hand and walked off – silently.

Josh didn’t even seem to react to Lauren wandering off into the cemetery and viewers were utterly confounded by the scene.

“Im confused is lauren leaving with josh or not #EastEnders,” asked one viewer.

Another tweeted: “Eastenders has confused me so much tonight, when did Lauren go off josh?

“Has Lauren just finished josh by walking past him with Louie on her crutch? Where’s she going? I need answers!”

A third wrote: “So Lauren walked straight past the car ??? I’m confused.. where are you going sis you can’t walk to Scotland #eastenders.”

“So Lauren’s big exit was her walking off, where’s she going?” asked a fourth adding: “I have a hip condition, there’s no way she’s walking miles with a stick I’m confused…… #EastEnders”

A fifth said: “Wait so Lauren didn’t even give him an explanation just walked away? #EastEnders”

Read more: EastEnders SPOILER: Tina’s past comes back to haunt her!

Another asked: “So…Um…Lauren just takes Louie, hobbles past Josh, and goes on a walk-about through the cemetery?

“Did I miss a scene? #EastEnders @bbceastenders”

Will you miss Lauren? Leave us a comment on our Facebook page @EntertainmentDailyFix and let us know what you think!