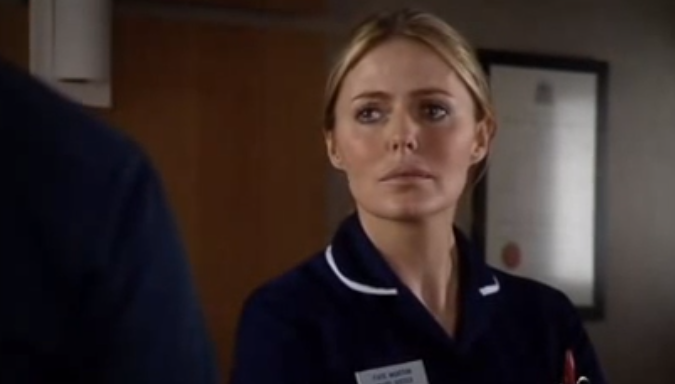 They have been away for nearly 10 years

Faye Morton and Joseph Bryne will be returning to Holby City as part of the programme’s 20th anniversary celebrations.

Faye, played by Patsy Kensit, and Joseph, played by Luke Roberts, were last seen in Holby nearly 10 years ago and will be returning under dramatic circumstances.

This will obviously lead to them coming face to face with the one and only Jac Naylor – Faye’s nemesis and ex love rival.

The turbulent history between the three doesn’t bode well when certain events mean they need to come together as life hangs in the balance.

Speaking about her return Patsy Kensit said: “It’s a great honour to be asked back.

“As soon as I got the script I sat down and read it as fast as I could, which shows what a gripping episode it’s going to be.”

“Faye has changed quite a lot, it’s very feisty and there are lots of surprises!

“It’s also really exciting to be working with Rosie and Luke again; we always had a fantastic time together on set and that’s not changed at all.”

Luke Roberts added: “Actors take jobs for a number of reasons. Pay the bills, learn the craft, further their career, tackle a challenging role. Holby City ticked all of those when I had the good fortune to join the cast in 2005.

“For five years it provided me with a much-needed community of artists and technicians who always made me feel at home. It was really like a family.

“So it’s been an absolute joy to slip back into the surgical scrubs, see so many familiar faces and reconnect with the likes of Rosie Marcel, Patsy Kensit, Jaye Jacobs, Bob Barrett, Guy Henry, Hugh Quarshie, Belinda Owusu and Alex Walkinshaw to name a few of the mega talented folks working on the wards.

“Not to mention our brilliant director David Innes-Edwards who has the colossal task of keeping us all in line!”

“It will be a particularly nostalgic and exciting treat for long-term viewers of the show as old Holby collides explosively with the present.

“Joseph was the love of Jac’s life, and as if that in itself weren’t enough to rock her world, he turns up with the woman who is Jac’s sworn enemy!

“It was for Joseph’s sake that Jac sent Faye packing in 2010 and as far as Jac’s concerned, it’s the ultimate insult and comes at a time when she is already feeling off-balance both professionally and personally.

“Continuing our current trend to go off format where story earns it, this unique episode concentrates entirely on this classic Darwin trio with all their past tensions and rivalries bubbling to the surface, leaving poor Fletch having a lot of catching up to do!

“It’s both exciting and emotional to welcome Luke and Patsy back to the Holby company – we feel so lucky and privileged to have wooed them back to celebrate the show’s history, and I cannot wait for this gripping and darkly comic story to hit the screens.”

The episode will air Autumn of this year.

Are you looking forward to Faye and Joseph’s return? Leave us a comment on our Facebook page @EntertainmentDailyFix and let us know what you think of this story.