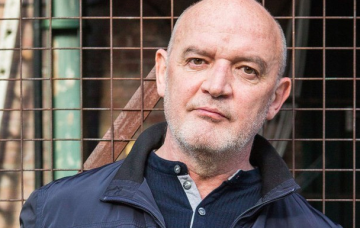 This gave us chills

Eileen Phelan found out a few of her husband’s crimes last night but did she grass him up and leave him rotting in jail where he belongs?

Instead, she wussed out of telling the police what she knew and then agreed to leave Weatherfield with her murderous husband.

And now we’re all worried Pat could escape justice completely.

Determined to get Pat to confess some of his sins, Tim saw his chance when he had the criminal in the back of his cab.

Bravely he confronted the brazen builder.

“In no particular order,” he said. “Anna. Michael. Luke. And Calcutta Street.”

Phelan managed to bluff his way out of all of the accusations, but he confessed that Calcutta Street was a scam.

But Tim was on the radio to the cab office the whole time Phelan had been talking – and Eileen heard everything.

Tim told her he was going to the police, and a stunned Eileen asked for the chance to talk to her husband first.

But when she did confront him – furious about what he’d done – he managed to convince her AGAIN that he was innocent.

“You used my son’s money to rip off my friends,” Eileen said.

But Phelan said: “Vinny ripped us off. I had an inkling it wasn’t legit.”

And then he dropped the biggest lie of them all.

Eileen fled to Liz’s, and then headed to the police station to report her husband. But it wasn’t long before Phelan had tracked her down and was begging her to reconsider.

Read more: Benidorm character ‘back from the dead’

Back home, he asked his wife where they would go from here.

“I can’t stay round here, knowing what I know,” Eileen said.

And she doesn’t even know the half of it!

Pat eagerly agreed to move away. And he even swore on his unborn grandson’s life that there were “no more secrets, no more lies”.

But will the couple really leave Weatherfield? Or will something happen to stop them?

Do you want to see Phelan brought to justice? Leave us a comment on our Facebook page @EntertainmentDailyFix and let us know what you think!