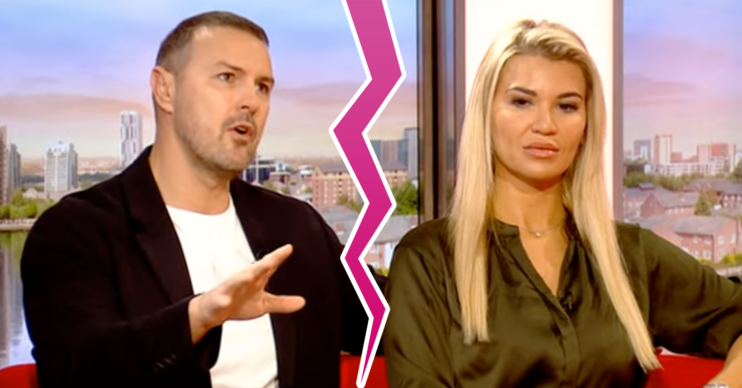 After weeks of speculation the couple have sadly separated

Paddy McGuinness and wife Christine have split, it has been confirmed today (July 22).

The couple released a joint statement earlier this afternoon.

Ahead of the split, there were unconfirmed rumours that Paddy had cheated on Christine with a “TV star”.

The Top Gear and A Question of Sport star met Christine in 2007.

They were introduced through a mutual friend while at an event.

The couple got engaged on Christmas Eve in 2010.

She wrote in her autobiography: “On Christmas Eve 2010, when I was 23, something quite amazing happened. I was sitting by the fire with Patrick and we were getting in the festive spirit and opening presents together.

“In the middle of the excitement, he disappeared.

“Eventually he returned to the lounge and presented me with a Christmas card. ‘To my fiancée,’ it read. ‘I’m not your fiancée, you idiot,’ I joked.

“And when I looked up, he was there with a stunning diamond ring – down on one knee.”

Paddy and Christine tie the knot

The couple married at Thornton Manor in Cheshire in front of 200 guests in June 2011.

Although according to Christine she “didn’t have any friends to invite”.

As a result, she said she only knew about 20 people there.

“Peter Kay was his best man. They’ve known each other since they were kids,” she wrote in her book.

Committed to their children

Paddy and Christine went on to have three children together – twins Penelope and Leo, nine, and six-year-old Felicity.

The couple remain living together and have pledged to remain friends for the sake of their children.

The statement said: “A while ago we took the difficult decision to separate but our main focus as always is to continue loving and supporting our children.

Who has he dated before?

His relationship with Christine went on to become Paddy’s most high-profile yet, with their marriage making headlines, especially over the past few weeks.

However, before meeting Christine, reports claim Paddy was linked to model Abigail Titmuss.

Reports of the alleged relationship – said to have happened in 2004 – have never been confirmed.

During his marriage to Christine, Paddy was rocked by a scandal when he was pictured on a night out with another woman.

He was seen “arm-in-arm” with All Saints singer Nicole Appleton. There is no suggestion that anything more happened between the pair.

The pictures surfaced in 2018 and Christine revealed how the snaps made her feel in her autobiography.

She wrote: “My husband, arm-in-arm with another woman.

“I felt physically sick. I ran to the toilet to vomit.

“Still to this day I can remember that absolutely awful pit-of-your-stomach feeling.”

At the time, she forgave him for the sake of their family.

However, she also said: “It was a bit of a heartbroken moment. I was absolutely devastated by these pictures.”

In the wake of split rumours, the couple decided to make some changes.

Christine told OK! shortly afterwards: “We’re putting effort in and making more time for each other – we haven’t done that since having children.”

Parenting hasn’t been without its problems, though.

All three of their kids, as well as Christine herself, have been diagnosed with autism.

Rumours first started to surface that something was wrong between Paddy and Christine when fans speculated that he’d had his tattoo tribute to his wife removed.

However, he then showed his support to Christine over her new documentary.

Christine then broke her silence on the split rumoursand admitted they had been through “difficult times”.

She then posted a series of cryptic messages on her Instagram page.

Friends then claimed that the couple, who have three young children, were “trying to work through issues“.

Christine then enjoyed a night out in London in early July without Paddy but appeared to make a statement that all was well as she was still wearing her wedding and engagement ring.

July 9 saw Christine admit the couple were having marriage problems.

Then, earlier today, the couple revealed that they had split “a while ago”.