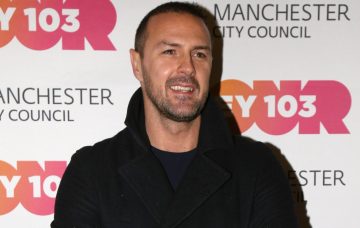 Catching some zzzs together!

As a father-of-three and in-demand actor and TV presenter, life must be pretty tiring for Paddy McGuinness.

The Take Me Out host has revealed he’s partial to an afternoon nap as he shared an image with his Instagram followers of himself enjoying 40 winks.

The 44-year-old wasn’t alone when he put his head down, as he was joined by his four-year-old son, Leo.

“The lads have been busted having a cheeky little, pre tea time snooze! #likefatherlikeson #loveasnooze#teatime #comfy,” he wrote beside the image.

Paddy and his wife Christine rarely share pictures of their three children so the star’s fans were delighted to get a glimpse of his little boy.

More than 10,000 of them liked the snap, while dozens commented to say how cute they thought it was.

“What life’s all about,” a third commented.

Another took the opportunity to praise Paddy and Christine’s work on spreading awareness of autism.

“Awwww keep up the good work u and ur wife are doing spreading Autism Awareness,” they wrote.

Leo and his twin sister Penelope both have autism, while Christine recently said their youngest daughter Felicity, 18 months, is also showing signs of having the condition. A diagnosis can’t be made until she’s older.

The couple shared their joy over the Easter weekend at finally being able to enjoy a family holiday.

In an Instagram post Paddy and Christine both shared on their respective accounts, showing their car packed up with the children’s duvets, the pair confirmed they’d spent a couple of nights away from home.

It was a milestone moment for the family, as they revealed their twins can struggle to cope with new situations.

Their post read: “Being parents with autistic children, for us, family holidays have been a pipe dream until now! After 4 and a half years we’ve finally conquered a family holiday… to Preston!!! Ribby Hall Village to be exact.

“We managed two days there, which for us was massive. We had to take so much stuff as familiarity is so important.

“To see our kids having fun was well worth it and they dealt with the change so well.”

The couple said they hoped their experience would give hope to other parents raising children with autism.

“If you’re a parent dealing with autism on a daily basis please don’t give up hope on things like holidays. It was a hell of a long time getting there but we did it. Now all I need to do is sleep for a week!!!” they wrote.

In a separate post sharing a selfie of her and Paddy, model Christine, 30, added: “We did it!!! Our first ever night away WITH the children! They coped so well with the change, very proud parents today.”

Christine and Paddy, whose The Keith and Paddy Picture Show will return to ITV this month, are keen supporters of autism charities and raise awareness of the condition to help others.

Read more: Stacey Solomon reveals anxiety gets so bad she ‘feels like she can’t breathe’

They are currently organising a Twinkle Ball in Manchester to raise money for the National Autistic Society.

Christine has also given her support to Autism Together’s Future 50 appeal.