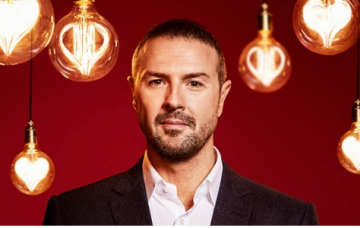 He declares his wife an amazing mum

Paddy McGuinness has paid tribute to his wife Christine on Mother’s Day, suggesting the pair are back on track following recent speculation about their marriage.

The Take Me Out host took to Instagram to share a sweet picture of his wife with their three children, paying tribute to the ‘amazing mum’.

Paddy wrote: “For all the amazing Mums out there. Happy Mother’s day!!! @mrsmcguinness is staying in her jimjams with the mini McGuinty’s.”

He added a heart emoji and #mothersday.

Paddy and Christine’s marriage was thrown into the spotlight in February when he was pictured on a night out with pal, All Saints singer Nicole Appleton.

Christine later shared a cryptic tweet reading: “When you realise you deserve so much more… that’s not a bad thing.”

As neither Paddy nor Christine said anything, it naturally led to dozens of unconfirmed headlines about what may or may not be happening in their relationship.

Thankfully, all is looking good!

Christine, 29, and Paddy, 44, spoke out last year about how their four-year-old twins Penelope and Leo have autism after Christine tweeted a moving poem on their birthday.

The couple, who also have 18-month-old Felicity, plan to host the Twinkle Ball in Manchester next month in aid of the National Autistic Society.

Did you receive lovely messages and gifts for Mother’s Day? Share your stories with us on our Facebook page @EntertainmentDailyFix!