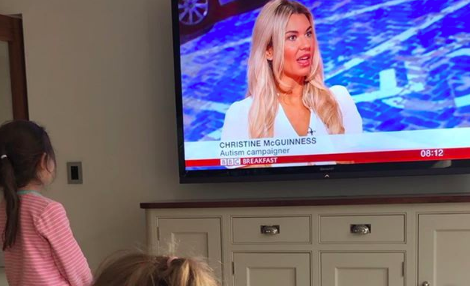 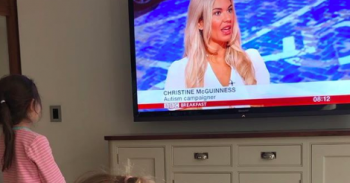 The comedian spent a rare day off with his young children

Paddy McGuinness shared a touching set of pictures of himself and his daughters watching their mum and his wife Christine on TV.

On a rare day off for the extremely busy comedian, Paddy enjoyed his day with his three young children.

Read more: Christine reveals Paddy’s been home five times out of the past 30 days

The Instagram snaps were paired with a tribute to Christine, who he says is his children’s ‘hero’.

He wrote: “My two baby girls watching their hero @mrscmcguinness on @bbcbreakfast this morning. We love you Mummy, keep up the good work. #mummy #hero #bbcbreakfast #autismawareness #bluebadge #goodfriday #twinkleball”

Former model and Real Housewives of Cheshire star Christine appeared on BBC Breakfast on Friday to encourage awareness about raising children with autism.

Her twins, Leo and Penelope, are autistic, and Christine said that she’s often questioned over her use of their blue disability badge.

“These are random people, the general public will ask, ‘why are you parked in that space? Can I have a look at your Blue Badge?’

“It’s so frustrating because if I can, I’ll park in a parent-child space, but then they’re often taken up – that’s a whole other subject with people who haven’t even got children,” Christine explained.

She also said that she found it much safer to use disability parking spaces, as they’re typically much closer to the buildings they need access to.

“It’s a lot safer for the children. My children don’t have much sense of danger at all when it comes to road safety, so they might freeze in the middle of the car park, or they might just run,” she said.

The couple discovered their eldest two children were autistic in November 2017, when diagnosed by a paediatrician.

They had become concerned when they noticed that they were having difficulty communicating and also coping with anxiety.

Christine has said that she’s noticed her youngest daughter Felicity has also shown signs of autism, but has yet to be formally diagnosed.

Did you watch Christine on BBC Breakfast? Share you thoughts with us on this story on our Facebook page @EntertainmentDailyFix