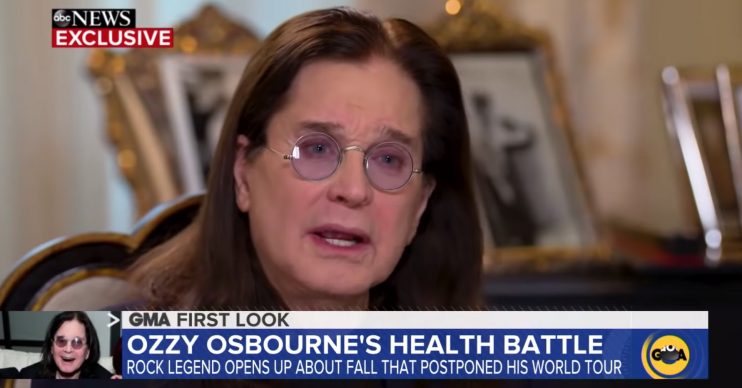 Shared the news with Sharon at his side

Ozzy Osbourne has revealed that he is suffering from Parkinson’s disease.

Legendary rocker Ozzy, 71, shared the heartbreaking news in an emotional interview on US breakfast TV, with wife Sharon at his side.

Ozzy said it had been ‘challenging for all of us’ but was far from his ‘death bed’.

.@ABC NEWS EXCLUSIVE: “The hardest thing is watching someone you love suffer.” Rock legend @OzzyOsbourne’s kids @JackOsbourne and @KellyOsbourne open up about their family’s new normal after their father’s Parkinson's diagnosis. https://t.co/tYd0K3rQet pic.twitter.com/8ayAFwOi9M

Ozzy said in the interview that last year was the most ‘terrible of his life’ after he experienced a life-threatening fall in February 2019, which was reported at the time as complications with flu and pneumonia.

After an operation, he experienced excruciating nerve pain and doctors found this was connected to Parkinson’s.

It has been terribly challenging for us.

“It has been terribly challenging for us,” he told Good Morning America.

“I had to have surgery on my neck which screwed all my nerves. I found out that I have a mild form of….’

Ex-X Factor judge Sharon helped to finish his sentence: “It’s Parkin 2 which is a form of Parkinson’s. There are so many different types of Parkinson’s.”

“I feel better now that I have owned up to the fact that I have a case of Parkinson’s,” he continued.

“It’s not a death sentence by any stretch of the imagination but it does effect the nerves in your body. It’s like you’ll have a good day, then a good day and then a really bad day.”

Recounting his fall a year ago, Ozzy continued: “A year ago I was in a terrible state.

“I’m on a host of medication, mainly for the surgery.

“I’ve got numbness down this arm and my legs are going cold. I don’t know if it’s the Parkinson’s or what. That’s the problem.”

The couple then revealed that they will be travelling to Switzerland to speak to a professor who specialises in the condition.

Ozzy also said that he’s determined to get healthy and go touring again.

“I ain’t going anywhere yet.”