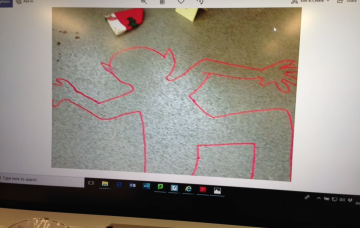 Headteacher has defended the project

Pupils arrived to find the “crime scene” in a classroom taped up with an official-looking police cordon.

An outraged mum claimed her nine-year-old daughter suffered nightmares as a result of the school project, which challenged youngsters to become detectives and solve the murder mystery.

Year 4 writing detectives are on the case! What has happened in 4VS today? Collecting as many clues as we can find. pic.twitter.com/PyYewMTlpx

She told the Manchester Evening News: “There was a crime scene in one of the classrooms.

“There was police tape and a table had been knocked over, and there was blood smeared on one of the tables.

“The idea was Elf had been murdered by another elf. My daughter came home and she was absolutely traumatised. My child was very upset last night and had to sleep in my bed.”

Its post said: “Year 4 writing detectives are on the case! What has happened in 4VS today? Collecting as many clues as we can find.”

“The children were all excited and they really did buy into it,” he said. “I have been a teacher for 30 years and this is, in my judgement, an appropriate, engaging and exciting thing that children aged eight and nine have done.”

Was the “elf murder” educational or potentially traumatising? Leave us a comment on our Facebook page @EntertainmentDailyFix and let us know what you think!