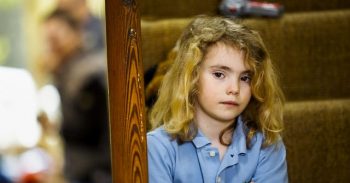 She played Karen Brockman in the BBC sitcom

Outnumbered star Ramona Marquez looks a far cry from her young character in a new photo.

Ramona took to Instagram on Tuesday to share a snap of herself looking very grown up as she showed off a huge tattoo on the inside of her arm.

Read more: GMB ‘taken off air’ as Piers Morgan lashes out at producers

Ramona has ditched her famous blonde curly locks for a brunette hairdo with blonde highlights.

The star showcased her new inking, which is a fire-breathing dragon on her left tricep.

One person said: “You’re so awesome. I am literally in aw of your tattoo,” while another wrote: “Beautiful tattoo!”

One person asked Ramona what her parents’ reaction was to the tattoo.

Ramona replied: “They were completely supportive and helped me choose a size design and placement.”

The star recently celebrated her 18th birthday with pals and shared a string of pictures from her night out.

It comes after Ramona thrilled fans as she reunited with her former on-screen brothers Tyger Drew-Honey, who played oldest sibling Jake in the series, and Daniel Roche, who played Ben, in December last year.

In the photo, the trio beamed as they posed alongside each other.

The show centred on a family living in West London, whose two parents, teacher Pete and personal assistant Sue struggled to balance their careers with their three children.

Last year, Claire and Hugh revealed they had become a couple in real life and said they were “so very happy” together.

What do you think of Ramona’s transformation? Leave us a comment on our Facebook page @EntertainmentDailyFix and let us know.