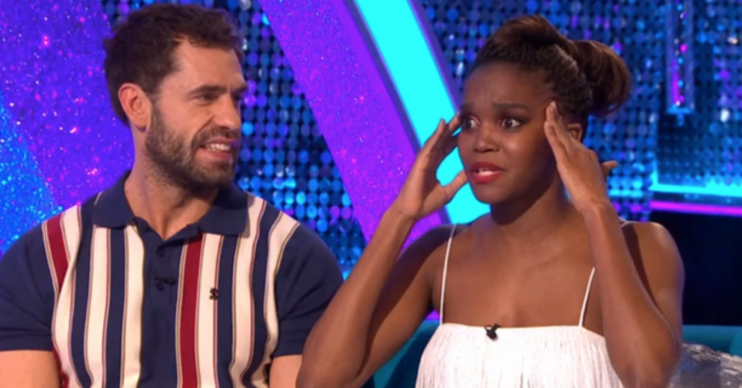 The 29-year-old professional dancer is allegedly worried that her ‘brand’ is being damaged after the pair were seen on a night out until 3am, which led to Kelvin’s wife of five years Eliza Marsland unfollowing him on Instagram.

To further add to the controversy, it was reported earlier this month that Kelvin had been sending texts to a blonde PR worker.

Speaking to The Sun, a TV insider said: “After Kelvin’s messages were revealed, Oti tried to distance herself publicly from him.

“She’s good friends with Kelvin but this experience has made her panic about the brand she has built.

“Oti asked that she be paired with someone older in the next series to stop any speculation about the nature of their relationship.

“Being linked to a scandal is the last thing Oti wanted and she never wants it to happen again.”

After being snapped out together in the early hours with her ballroom partner, the Strictly favourite was reportedly desperately trying to arrange a meeting with Kelvin’s wife.

In other news, current Glitterball holder Oti has reportedly signed up to co-host Sports Relief.

She will apparently join regular hosts Gary Lineker and Paddy McGuinness when the charity telethon returns on March 13 (2020).

Oti has also appeared on Celebrity Masterchef, and is currently appearing as a judge in BBC One’s The Greatest Dancer, so she’s no stranger to the small screen.

A source told The Sun: “Oti is in high demand with telly bosses who think she deserves to be centre stage on more prime-time shows.

“She has always stood out from the other Strictly professionals with her bubbly personality and talent. Now they’ve seen an opportunity for her to shine on her own.

“Sports Relief is a big step up as she swaps her dancing shoes for on-screen presenting – but producers know she’s got what it takes to be a huge star and they’re lining up to work with her.”