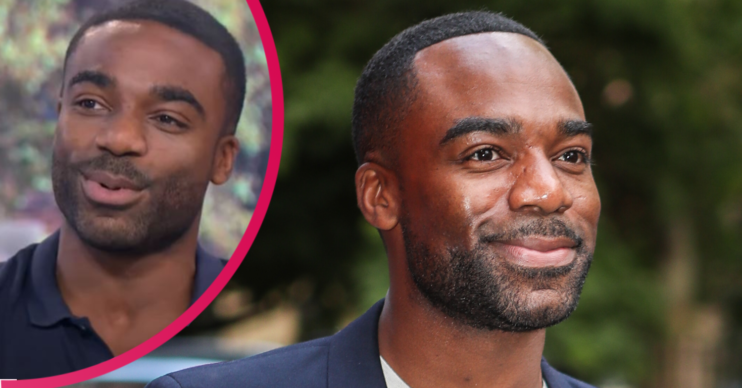 Following his stint on This Morning

Ore Oduba received praise for showing the ‘reality of parenting’ after he shared a picture of himself with his son.

What did Ore Oduba say about his son?

And on Instagram this weekend, Ore posted a photo of himself enjoying a cute cuddle with his little boy.

But he was honest to his followers in the post’s caption, where he revealed his son – as with all children his age – isn’t always as cuddly as he appears in pictures.

In a message that’s likely relatable for many parents, Strictly winner Ore said the toddler had tried to ‘scratch his face off’ just moments before over a box of Peppa Pig raisins.

He wrote in the caption of the post, which was also an ad for Wet Wipes UK: “MOOD SWINGS. Don’t be fooled by the PDA, this is Roman on a ‘good’ day… a big kiss for dad, moments before he screamed and tried to scratch my face off cos I wouldn’t give him a pack of Peppa Pig raisins. Standard.

“Don’t get me wrong, I love it when he’s affectionate like this even for just a second. Only he usually makes us pay for it. Two and a half years old and Ro has definitely reached peak two-nager/terrible twos during lockdown!

“Thankfully Portia and I are not alone. It’s tough enough being a parent without a global pandemic!”

In the comments, fans thanked him for being so honest.

One said: “So glad it’s not just me going through this! It’s nice to hear people speak up, makes me feel like it’s normal and I’m not a terrible parent.”

It only ‘gets worse’

Another wrote: “Thank you for sharing this @oreodubaofficial. People need to hear about the reality of parenting… unfortunately, it only gets worse.”

A third told him: “OMG the tantrums are real… I’m going through the terrible twos atm too.”

Ore, who won Strictly Come Dancing in 2016, hosted This Morning last week with Rochelle Humes. The pair were standing in for regulars Phillip Schofield and Holly Willoughby.

Can you relate to Ore’s post about his son, Roman? Leave us a comment on our Facebook page @EntertainmentDailyFix and let us know what you think of it.